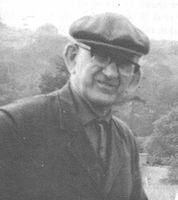 Born 1901 in Penrhyn, Thomas Davies (known as Tom) was an engineman of both the Old Company and early revival periods of the Festiniog Railway. Tom began working on the FR at fourteen and a half years old in the summer months of 1915 in a seasonal job as as fireguard/watchman patrolling the line below Tan y Bwlch. From that he graduated to porter at Minffordd and eventually got a job cleaning the engines at Boston Lodge.

Tom and his brother Will were promoted to engine drivers, Tom in 1922. Tom was the driver of engine involved in the "breakaway" incident in Moelwyn Tunnel. He was made redundant in 1940 and moved to Cooke's explosives factory in Penrhyn but in 1944 his brother Will was badly injured and the FR asked for him back. He remained until 1946 when he and Will worked the last train of the old company.

In 1966 he retired from Cookes and rejoined the FR the next day on a part-time basis. In summer he shared Prince with Bill Hoole and in the winter he worked with the PW department. He and his wife took in young volunteers. Tom died on 6th June 1971. (more...)