Little Wonder was a steam locomotive built for the Festiniog Railway in 1869. It was the first Double Fairlie to be used by the line and it is considered to be the first successful double Fairlie. It ran trials against the England engines between September 1869 and July 1870. The publicity this gave Fairlie persuaded him to grant the FR the right to build future locomotives of this type without having to pay him for the patent rights.

It was, however, a prototype and, as such, it had design faults that eventually resulted in the locomotive being withdrawn worn out after only 13 years. However, its legacy lives on in the many subsequent Double Fairlies used on the FR. 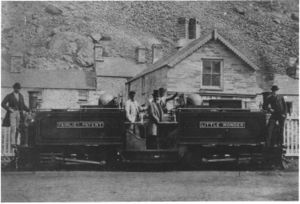 Little Wonder c1870 at Duffws.
Charles Easton Spooner in top hat, son Percy on right hand front footplate. The person at left may possibly be William Williams (1836), but if so, he has no beard.

Little Wonder was designed by Robert Francis Fairlie and built by George England & Co. at Hatcham Iron Works. It is recorded as being exhibited alongside Fairlie's Steam Carriage on 15th July 1869 and was delivered to the FR by 26th August 1869. It cost the FR Co. £2,006.

Little Wonder is considered to be the first successful double Fairlie and owed its success to the fact that it was the first to have two separate fireboxes. It was, however, a prototype and, as such, it had design faults in the shape of the fireboxes and (in its original form) the lack of balance for the cylinders on the bogies. 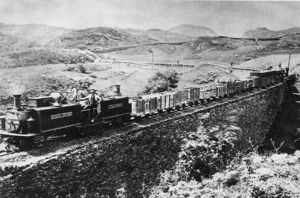 The success of this locomotive enabled the FR to avoid having to double the line. It ran trials against the England engines between September 1869 and July 1870. These were witnessed by many eminent figures from Britain's railways, including the Duke of Sutherland, and foreign emissaries from many countries, including Russia. The publicity this gave Fairlie persuaded him to grant the FR the right to build future locomotives of this type without having to pay him for the patent rights. The success of the locomotive, and its use on the narrow gauge, inspired the building of narrow gauge railways in difficult terrain around the world.

In the trials of 1869/70 it was shown to be capable of hauling trains more than twice as heavy as the England engines. The details of two runs are recorded here:

The first train in September 1869 consisted of 111 slate wagons, 6 carriages, 60 passengers and 12 goods wagons. This weighed 133tons and was 1348ft in length. The train was divided at Hafod-y-llyn in case the loco stalled in Moelwyn Tunnel. With the remainder of the train, however, Little Wonder went through the tunnel at 23mph. On the return journey a speed of 35mph was recorded.

In July 1870 it hauled a train of 75 loaded slate wagons and 8 unloaded totalling 210tons approx from the Cob to Gwyndy Bank, where it was shown capable of restarting the train on the gradient. The loco averaged 13mph on the first part of the test.

Early records show William Williams (1836) (later the Locomotive Superintendent) was one of the first drivers of Little Wonder. By the time his proper records begin Little Wonder had been in the works since November 1874 awaiting tubes. All 218 tubes were replaced and referruled, new ash pans were fitted and the rings on the exhaust pipes changed and the loco re-emerged in May 1875.

A month later it was in with leaking tubes, a wheel worked loose in August and then one of the bogie frames cracked in the same month. As part of the repair a new corner angle was fitted from cylinder to frame. It was repaired by the end of September 1875.

In 1876 another wheel worked loose in February and then fire box work and caulking of tubes was needed in April.

In August the frames were given another overhaul, strengthening the fastening of the cylinders and there is the first mention of balance blocks. All the wheels were taken off and re-keyed on their axles. A new smokebox and a new front plate were fitted at the bottom end, and new smokebox doors. 2 new baffle plates were fitted on the fire doors and a new pressure gauge was put on the weather board. This is the last time it is recorded as being fitted with new wooden brake blocks. 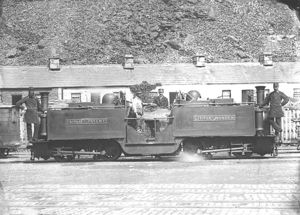 1877 was relatively uneventful; a crank pin broke in April and the tubes needed caulking again in June. However, by January 1878, the loco is recorded as being out on trial after being retubed and referruled. In May 1878 an iron patch was put on a crack on the side of the boiler. In June the firebox was patched and then, in July, it had an accident with a locomotive from the Ffestiniog & Blaenau Railway. This cracked the bottom end bogie frame and repairs took until October to complete. The opportunity was also taken to move the whistles outside the weather boards at this time. In December a copper patch was put on the firebox and then in March 1879 two further patches were put on.

By August 1879 the half yearly report to the company board recorded that the firebox is in a dangerous state, the Machinery is in a fair state of order(would cost £65 in order). The decision was taken to repair the loco and in November four new patches were put on the corners of the fireboxes. The frames were overhauled and tightened and the motion maintained. In April 1880 two corners of the firebox were repaired and in June the working pressure is recorded as 110lbs. In February 1881 C.E. Spooner recorded Is in fair condition, & continues to do a good amount of work after the thorough overhauling & repairs made last half year.

In March 1881 the loco came in for the repair to a crack in the centre of a bogie (a new wrought iron ring put in hot); the cylinders were refastened and 4 new stays inserted to strengthen the frame. Two new sliding plates were put in at the bottom end, and all rivets tightened.

A footboard was damaged at Portmadoc in May.

In August the frame bolts were tightened again and a new chimney was put on.

In December W.Williams described the engine as Boiler leaky, otherwise in fair working order. The boiler frames and motion were worked on in December 1881/ January 1882 and then in February the firebox gave trouble again. Patches were put on both sides of the firebox shell and one below the footplate. In June it is recorded Boiler in very bad state, otherwise in fair working order, worked up to 98lbs.

In July the cylinders were refitted to the frames again and a new wrought iron plate fixed to the side of the bogie.

At the beginning of September the foundation ring was caulked, but the loco's days were numbered. On December 6th 1882 the entry reads Little Wonder Condemned.

Parts of the original loco were subsequently used on Little Giant, Palmerston and Prince. The only part known to survive to this day is the bell.

The loco had Gooch valve gear with curved links. 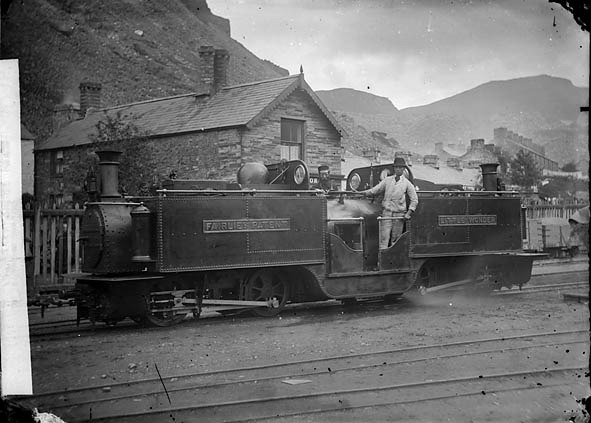