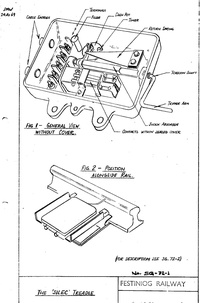 Train detection is an integral part of signalling systems. The knowledge of the location of a train can be used to alert a signalman or level crossing keeper of the approach of a train, or to control automatic level crossings. Ultimately train detection is used in a signalling system as part of the interlocking between points and signals to prevent unauthorized or unsafe train movements.

In traditional signalling systems with mechanical operation of signals and points, there was initially great reliance on the signalman being able to see the location of trains when managing train movement. One of the most important responsibilities laid on the signalman was not to move facing points either under a train or when a train was approaching. Various mechanical and electrical means of detecting the location of a train have been devised, three of which are used on the Ffestiniog & Welsh Highland Railways.

Until the commissioning of Rhiw Goch signal box in 1975, the primary use was to indicate the approach of a train at level crossings and to replace colour light signals automatically to Danger at Minffordd, Penrhyn, Tan y Bwlch, and the electrically operated mechanical Up Advance signal at Harbour Station as the train went past the signal. This was achieved by means of a treadle, so we look at this device first. We then look at what are called locking or fouling bars as used at Rhiw Goch and Dduallt, and finally we consider the most common form of train detection, the track circuit. (more...)