Special quarrymen's carriages first appeared on the FR in 1867. Their primary use was in special trains that carried men to work in the quarries around Blaenau Ffestiniog, with a single fare of 6d, any distance. Though many quarrymen lived in the various communities along the FR others came from further afield, having walked from home to join the train. Initially the trains ran only on Monday mornings and Saturday afternoons as most men stayed at the quarry barracks during the week. The Saturday train was usually added to the midday Down departure from Blaenau, with spectacular results as seen in the photo below.

Detail from a Bleasdale photograph, taken at Stesion Fein in Blaenau Festiniog on 27 August 1887, showing at least 25 quarrymen's carriages making up the rear of the Saturday midday departure from Duffws. 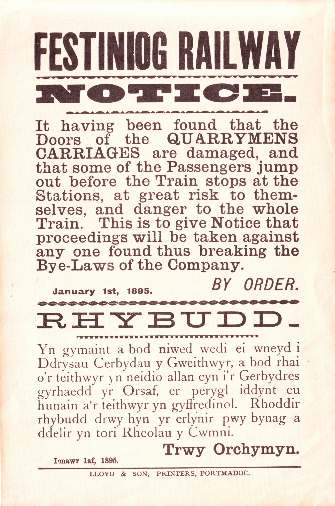 A reproduction 1895 notice to quarrymen.

The introduction of steam traction in 1863 extended opportunities for men residing along the course of the FR, and even beyond, to take employment in the slate quarries of Blaenau Ffestiniog. Special quarrymen's trains with primitive passenger vehicles were introduced in 1867. It seems likely that before then some men had ridden on the slate trucks, but the Board of Trade would not sanction this. Barrack accommodation was made available at the quarries during the week so initially the Up train ran on Monday mornings and the Down train on Saturday afternoons. During this period when only a weekly service operated the carriages were stabled in an open, lean-to, carriage shed at Duffws during the week. In 1881, a daily service was introduced, allowing many of the men to return home daily.

Over the years, a number of different designs of carriage were used. The earliest were little better than low-sided, unsprung, wooden wagons with planks for seats; photographs appear to show that these overhung the sides and some passengers' legs hung outside! There was no protection from the elements. In order to simplify the story this type was designated (by Boyd) Type 1a.

The first improvements to quarrymen's carriages involved the erection of crude, shed-like, covers with zinc roofs, but lacking both doors and windows, over Type 1 vehicles. These have been designated Type 1b.

Type 2 carriages appear very similar to Type 1b, but were built as covered vehicles from new. In later years they acquired doors with small windows (Type 2b). Their running gear was not improved, however, and they remained unsprung.

Closed carriages with glazed windows and springs, Type 3, were not introduced until 1885. From around this time it became customary for the Quarrymans' train to include one or more of the Ashbury four-wheeled carriages next to the brake van, either for any ordinary passengers or for more senior quarry personnel.

A “Report of the Departmental Committee upon the Merionethshire Slate Mines” of 1895 - Promotion of Health - stated at Para.79: We are of opinion that some of the illnesses of the Festiniog men may be fairly attributed to chills contracted in the daily railway journeys to and from the mines (quarries). The men waiting for their train, sometimes in wet clothes, may often be seen sitting on the ground at one of the stations of the Narrow Gauge railway, as there is not sufficient bench-accommodation. A journey of three-quarters of an hour in damp clothes in a draughty railway carriage may easily lay the foundations of disease, and quarry men who can live within easy walking distance of their homes would, a priori, be expected to be less subject to illness than those who travel daily to and from their work by rail. On the other hand, one of the witnesses told us that, in his opinion, lower house rent at Penrhyn and a better climate more than made up for the possible risk of catching a chill when travelling. The medical men do not agree with him on this point. The stations and the carriage accommodation of the 'Narrow Gauge railway might doubtless be improved, and some effort might be made by the railway companies to run more convenient workmen's trains. [1] Partly due to this report the FR purchased the two Ashbury Bogie Carriages 21 and 22, and one of these usually appeared in the Quarrymans' train thereafter, though the Type 3 remained in use.

The quarryman's traffic was heavy in the later 19th and early 20th century but never fully recovered following the Great War. It was probably never all that profitable, and the railway company and quarrymen were in fairly constant contention about the quality of carriages provided, and the way the vehicles were treated by their passengers. It appears that, up to the start of the 20th century, a programme of renewal meant that older vehicles were replaced on a fairly steady basis.

The 1895 notice to quarrymen reproduced here demonstrates that the FR was not always happy with the behaviour of the passengers. The men tended to have acquired or made their own private carriage keys to enable them to jump off the train before it stopped. It is interesting that English takes pride of place on the notice. One wonders if the Company's threat was an empty one.

Quarrymen's carriages were sometimes pressed into service in passenger trains at times of high demand for seats.

These vehicles were little better as conveyances than slate wagons, being small unsprung four-wheeled cars fitted with seats but with no protection from the weather. They were open two-compartment vehicles built rather reluctantly by the FR when Captain Tyler refused to allow the quarrymen to be carried in slate waggons. There were 32 of these vehicles available for use in 1871. 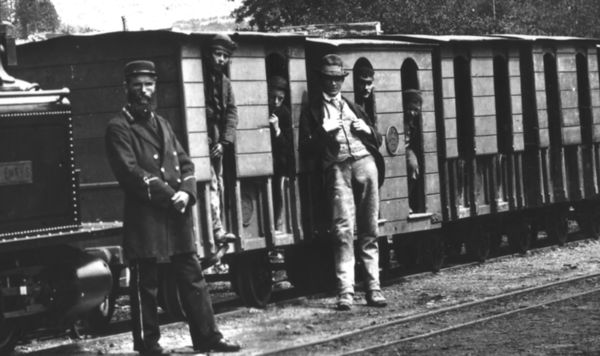 Type 1b and 2 quarrymen's carriages.

From 1873, it appears that many were fitted with a timber upper superstructure providing doorways but no doors or windows. These are referred to as Type 1b. The evidence suggests that they had all gone, or at least had ceased to be used as quarrymen's cars, by 1887. None of these vehicles survive. The second vehicle in the photograph is a Type 2a carriage (see below). 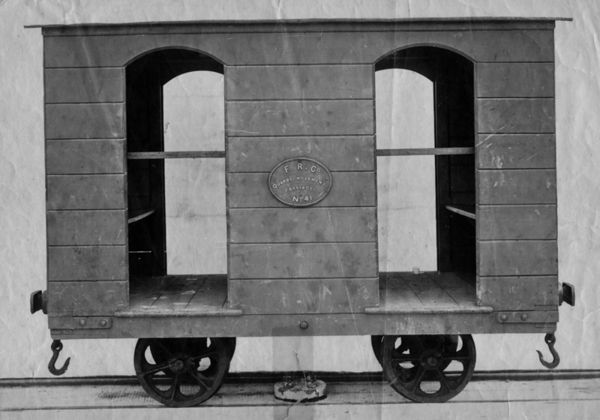 Type 2a quarrymen's carriage when new.

They were unsprung and resembled dog kennels on wheels even more than Type 1b, with open doorways but no doors. The photograph below shows one carrying numberplate 41 and there were 44 Quarrymans' in 1876[4]. The transverse benches were so close together that the passengers had to interlock their knees, hence their name of 'zip-fasteners'.

Type 2b - Rebuilt with doors and windows, from 1881[edit source] 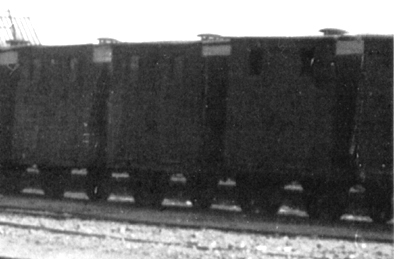 Type 2b quarrymen's carriages, with doors

From the introduction of daily trains in 1881, a programme of conversions to fit doors containing small windows was commenced. The resulting carriages have been referred to as Type 2b.

By 1887 there were 15 Type 2 in service numbered 19 to 33, which means that some renumbering had occurred, and it appears that the last of the unconverted Type 2s was eliminated in 1889.

With the introduction of Type 3 (see below), some were dispensed with and some were converted for other uses. It was thought for a long time that the Hearse van was converted from a Type 2 but close examination has revealed there are significant differences in the construction. Three bodies became shelters for slate loaders at Duffws and Minffordd. Others were used as P.W. shelters along the line. Several found use as station shelters on the Welsh Highland Railway. Still other carriages became derelict and were converted to firewood at Boston Lodge after the First World War. One body fitted with doors and windows survived into the preservation era as a shelter at Llechwedd Coed. It was subsequently moved to the Maenofferen Bach shed at Minffordd.

A replica of this type has been constructed by the FR Heritage Group with help from the young volunteers at Kids Week. The replica carriage saw its first runs at the 2013 Vintage Weekend on 12th October. It has been numbered 33, but is not used for farepaying passengers. For more details and pictures see Carriage 33. 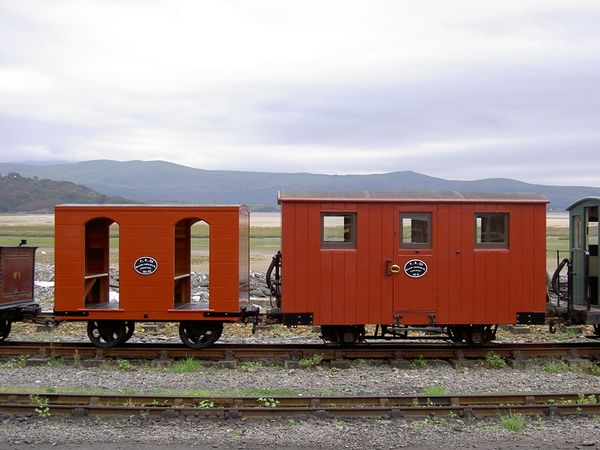 From 1885 to 1887, eighteen of these carriages were built at Boston Lodge and were numbered 1 to 18. Subsequently, more were built to replace Type 2 vehicles, for example three in 1890 and others in 1897.

They had springs and seated up to 16 in a single compartment on perimeter seats. There was also a 'mule' or seat on top of the vacuum brake cylinder set in the middle of the floor, a seat traditionally occupied by the most junior person present - usually a Quarryman's Lad. Otherwise it might be used as a card table, but players needed to be accurate in dealing onto the mule. In other carriages there were Bible study groups, choir practices, self-improvement classes, trade union branch meetings and so on. There was a central door on each side with a droplight window, flanked by another droplight on each side of the door. Should extra light be required, a quarry candle was stuck to the wall with a bit of clay. The Rev J Timothy (Timmy) Phillips also described the workmen's carriages, of which he said,

(They) were box-like arrangements, each having a door, and a couple of windows on either side, with very little provision for comfort. They were designed to hold 16 passengers and there was a round iron pouffe in the middle which was referred to as "y mul" (the donkey). It was a cover for some sort of mechanical arrangement. This sacred spot was reserved for the Oracle of the company, usually the oldest inhabitant, always the man they reverenced the most.[5] 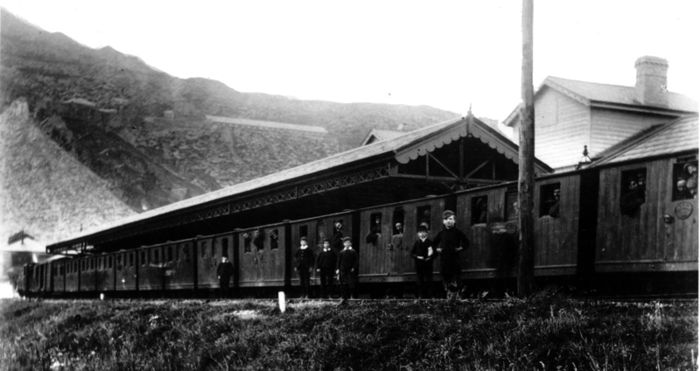 Only Carriage 8 has survived in comparatively unaltered form and forms part of the present-day heritage passenger fleet. However, a number of them were converted for other uses: