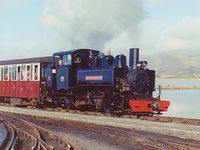 Mountaineer is a 2-6-2 side tank locomotive used on the Ffestiniog Railway. It was originally built in 1916 for the War Department and later saw use in France before being bought privately for preservation in the UK. The locomotive arrived on the FR in 1967 and quickly became an important member of the fleet. Much rebuilt to improve its usefulness, it saw regular use on both the FR and WHR until 2006 when it was withdrawn needing an overhaul. Since then it has been stored under cover awaiting the time and resources required for the rebuild.