Duffws was the upper terminus of the Festiniog Railway for goods traffic from 1836 to 1946. Over time there have been at least three different spellings of the name: Diphwys, Dyffws and Duffws.

The Duffws passenger station first opened in January 1866 and first closed in 1923, reopened in 1925 and finally closed as a passenger station in 1931. The building that remains today is the second station building on the site and it currently serves as a council operated public convenience, across the main road from the Queen's Hotel.

The branch line to Duffws was not included in the 1832 Act of Parliament and opened slightly later than the original main line to Dinas. It originally carried little traffic until connecting lines to the quarries were built. The first of these was an extension opened in 1854, curving to the North and up an incline to serve Lord Newborough's Bowydd Quarry. This is shown in the first two plans below, which were prepared in 1860 in connection with the Festiniog Slate Co's proposal to take over this incline as part of their scheme for what was later to be called the Rhiwbach Tramway to serve their quarry at Rhiwbach and a number of others. This line was completed in 1863. Boyd occasionally refers to it as the 'Festiniog Extension Railway' but this was not an official title and it was not FR property.

Another part of this scheme was for the FR to take over the first part of the extension around the curve to the foot of the incline. A boundary stone was erected at this new boundary of FR property, and this acquisition also allowed construction of a Station Master's House inside the curve.

The plans also show that a row of cottages had been erected on the North side of the line, and an exchange of lands was proposed between Lord Newborough and the FR to allow the FR line to be moved South to create a clear roadway in front of the houses. The original end of the FR line was outside the last-but-one of these houses.

Finally the plans show that the FR was to lease a small triangular plot to the south of the line, as a site for the first station.

The original station building was at 90 degrees to the running line due to the shape of the site. It was probably originally intended purely as a goods depot, but from 1866 had to handle passengers as well. The third plan shows the internal layout and a commendable attempt to accommodate all requirements, but it must have been cramped at busy times. Duffws was much more convenient for the town than Dinas, so much so that by 1870 it was decided to close Dinas to passengers in favour of Duffws.

It was therefore necessary to improve the facilities at Duffws, and the fourth plan shows the old station in black, against the then boundary of the site, and the adjoining land which was to be leased for the improved station marked 'Land already arranged for by lease'. A second incline has now been added, which served Diphwys Casson and Votty & Bowydd quarries.

The station buildings were located in the centre of the site with the running lines to the north and the sidings to the south.

The passenger building which has survived is actually quite small, but contained four rooms - from East to West: Luggage Office (with passage to Ladies' WC behind), Ladies' Waiting Room, General Waiting Room and the Booking Office at the Tanygrisiau end of the building. The booking office had a ticket-issuing window to the circulating area, as at Minffordd.

In addition, at the eastern end of the building there were open-topped urinals and towards the rear there were separate male and female water closets. These original sanitary facilities were not demolished immediately after closure of the station; in fact the open-air Gents was roofed at around this time and remained in place until at least 1968 and can be seen in the photo of that date below, also more clearly in iBase 1917 (dated 1947), 1918 (1949) and 2248 (1954). The earlier arrangement with just a wall around the Gents may be seen in iBase 1898 (dated 1925) and 1913 (1927). The patch of now-exterior wall composed of quarry waste (rather than the dressed stone elsewhere) marks one end of the four-stall urinals and the interior of the Ladies' WC.

Second Station Building at Duffws as built (?) c.1875; plan emended in April 1874 and outline of Turnpike Bridge on plan: still single track towards Duffws Junction. South is to the top.

The plan to the left shows the building more or less as it is now (allowing for the removal of the external lavatories and the curved walls around the gardens) except that the doors in the front of the Booking and Luggage Offices are shown closer to the ends of the building than they are now. The present arrangement with the doors central within the gables does not look like it has been altered. Indeed the gables appear wider than shown on the plan. Maybe it was altered in construction to achieve its pleasingly symmetrical appearance, and to make the offices larger. There is no photographic evidence that the curved wall and little garden at the West end were built: for most of the life of the station this area was an open yard separated from the rail-level platform by a fence, see iBase 1889. The garden at the East end is looking rather overgrown in iBase 1898 (taken in 1925). This picture shows only one doorway from the platform directly into the Gents and garden instead of the two shown on this plan.

An unusual feature of the building is that it never had any doors in the rear, only in the platform side, and one, now walled up, in the East end. The blocked door at the East end was not for external access but was the opening of a passageway behind the Ladies' Waiting Room to the original Ladies' WC, now demolished. Passengers approaching from the High Street would have had to walk across the sidings to get on to the ground-level platform, but there were paved areas for passengers and carts to cross the tracks safely. This station was not quite unique in its lack of rear access: the same feature applied to the 1879 building at Harbour Station until 1960.

There was a large goods and carriage shed, of which no trace now remains, built at the same time as the second station building and demolished shortly after the 1931 closure. At the far east end of the site there was a water tower (later moved to Stesion Fein) and a shed for quarrymens' carriages, which lasted rather longer. At the west end was a building which included Porter's Room, stable and cart shed.

There was a Refreshment Room on the opposite (North) side of the station which appears in the background of many early photos of locos at Duffws, but it was probably not a railway-owned facility as it was outside railway premises, being separated from the station by the passenger line and run-round, the mineral lines, a fence, and a public road (Dolgareg-ddu). Later pictures show it as the shop of J. Jones, Tailor, and still later ones show it as a general grocery. It was derelict in the mid-60s [1] and demolished by 1968. Coincidentally the last-but-one house at the Quarry end of the next terrace was leased by another J. Jones, and it is outside this property that the Duffws branch terminated in horse-drawn days, laid in the road to Rhiwbach (Dolgareg-ddu). The approximate end of the FR property before 1863 is in the road adjacent to the last of the new bungalows which have replaced the original cottages.

Alongside the terminating lines in the station there were through mineral lines connecting to two inclines to the east, one of which served Diphwys Casson and Votty And Bowydd quarries, and the other connected to Maenofferen Quarry and the Rhiwbach Tramway. See Quarries Served By The Festiniog Railway. The mineral lines remained in use when the passenger and goods yard tracks were removed after the station closed in 1931. Following the closure of Duffws FR passenger trains were terminated at the GWR Exchange.

Originally single track, the Duffws branch soon became complex with branches to quarries, other local businesses and the LNWR exchange yard, also the junction with the Festiniog and Blaenau Railway. By 1875 the FR formation was double track on the approach to Duffws and in 1878 was fully signalled with McKenzie & Holland semaphores. The two lines were operated as a passenger single line and mineral single line rather than the usual up and down lines. There was a signal box before the station in a recess in a retaining wall on the other side of the Queens Road Bridge. It had 14 levers. Most of the signalling went out of use with the granting of the Light Railway Order. Levers disconnected from the signalling apparatus w.e.f. 10am, Wednesday 29th August 1923 and new catch point opposite the former signalbox put in.[2] Final recovery of equipment decommissioned since 1923 took place during the first half of 1929. 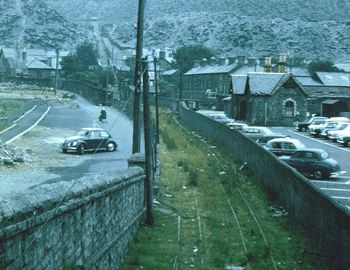 Duffws in 1968. This picture was taken from the Queens Bridge which carried Church Road over the line. The bridge was built in 1875: previously there had been a level crossing. The bridge was widened in 1933 but has now been removed.

Note the original toilets just visible at the far end of the station building, and the columns for the canopy at the front. Beyond the fence to the left of the mineral lines is the site of a building once a Refreshment Room and later a shop (J. Jones, Tailor), that appears in the background of many old photos of locos at this spot.

The tracks visible in the photo (left) were retained to connect to the quarry inclines, but were walled off from the rest of the site. After the FR ceased to operate trains in 1946 the quarry companies arranged to work the traffic themselves over these lines from the inclines to the LNWR and GWR yards using their own diesel locos, which were stabled in a shed under Queen's Bridge, see iBase 1921. This traffic provided a small income to the FR Co and continued into the 1960s. It can therefore be said that revenue-earning traffic over the FR never entirely ceased.

The quarry lines were removed in October 1968 and the wall was later demolished and the car park extended.

The canopy over the open-fronted circulating area was retained after closure but has since been removed, most likely at the same date as the removal of the old lavatories. More recently the separate doors for the two waiting rooms have been combined into a single central door for the disabled toilet, and the whole of the remaining interior is now occupied by public toilets. The building has recently had a sympathetic renovation on a historical theme.

Since 1979 a small diesel loco (Hunslet 2207) and two wagons have been on display here - the display was refurbished and slightly relocated in 2012 as part of a major regeneration scheme for the town, which included alterations to the car park area and construction of slate-built decorative features as memorials to the slate industry.