The Coalition is an electric locomotive from Llechwedd Quarry, resident on the WHHR from 2010 - 2018.

The following article was taken from the official Press release issued in 2010 jointly by Llechwedd Slate Mines, Blaenau Ffestiniog, Narrow Gauge Railway Museum, Tywyn and Welsh Highland Heritage Railway, Porthmadog. However, some editing has taken place, reflecting events since its issue, and changes in the tense of the text.

Two of the most historic railway engines in Wales "The Eclipse" and "The Coalition" were recently moved to the WHR Museum, as a first stage to their restoration. They are two of the oldest electric locomotives in Britain, and were based at the Llechwedd Slate Mines at Blaenau Ffestiniog.

They were converted over 80 years ago to run on electricity at a time when most of Britain's railways used steam power, and mains power was still a new thing in most people's homes.

They had worked at the Llechwedd Slate Mines until the 1960s, shunting trucks of slate around the site. When they were withdrawn from service, they were preserved on static display, at exposed locations on the Llechwedd site.

Time and the weather have taken their toll on the locos, and now a new agreement means that the pair will now be kept under cover until the finance and means can be found to restore them.

Their history is even more interesting because they actually started life as steam engines built in the 1890s, but were rebuilt as electric engines at Llechwedd, by the company itself.

Transport for the two locomotives from Blaenau Ffestiniog to Gelert's Farm Works at Porthmadog took place on Wednesday 21st July, and was paid for with a grant from the Narrow Gauge Railway Museum in Tywyn, Gwynedd.

The locomotives are owned by Slate Heritage International, a Registered Charity based at Llechwedd Slate Mines. The company has retained the services of Dr David Gwyn, an industrial archaeologist based in Gwynedd.

David Hicken, Director, Slate Heritage International said: 'We are pleased that these two important pieces of slate mining history can now take a step towards being restored. Once the locomotives have been restored, we intend that one of them will return to Llechwedd to be put on display, with the other being on show at the WHHR in Porthmadog.'

Don Newing, Secretary of the Narrow Gauge Railway Museum Trust said: 'These locomotives are historic in their own right because they show how the Welsh slate quarries were at the cutting edge of technology in making the switch to electric power. They also show the creative innovation which was the lifeblood of the slate industry because the Mines owners took two old steam locomotives and converted them into the new electric engines.'

James Hewett, then Chairman of the Welsh Highland Heritage Railway said: 'We are pleased to help play a part in preserving these locomotives for the future. The WHHR is developing a new museum in Porthmadog to show how the narrow gauge railways of the area influenced the world. The unusual history of these locomotives means (they) have a special place in the hearts of many railway enthusiasts, and are just two examples of how Wales led the way in industrial technology.'[video 1]

Restoration of the locomotives is likely to take several years, and will not begin until finance is in place to complete the task. Bids for grant money will probably be necessary to finance the work.

The Coalition in the shed at WHHR, shortly after arrival in 2010 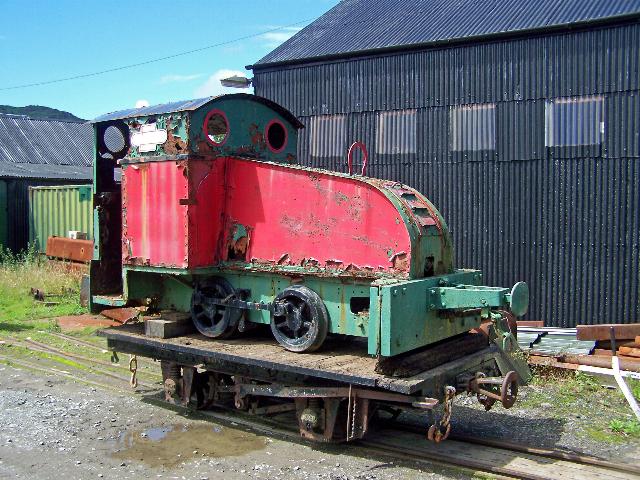 The Eclipse outside the shed at WHHR, shortly after arrival in 2010

Unfortunately since their arrival neither funding nor effort were available for their conservation, and they eventually returned to Llechwedd where they were stored in the open. However they have now been taken to Statfold Barn where they are kept indoors and available for viewing on Open Days.

Some authors state that the frames and wheels actually came from Makers No. 1568, built 1899, 0-4-0 ST "Dorothy" but it appears that although this loco was dismantled the conversion was not completed, and the remaining parts have survived and are now in private preservation.

IST = Inverted saddle tanks, which aren’t exactly common. The inverted saddle tank was a variation of the Wing Tank where the two tanks were joined underneath the smokebox and supported it. This rare design was used for the same reasons as the wing tank (better weight distribution, and easier access to the inside motion) but provided slightly greater water capacity. The original design seems to have been a speciality of, but not limited to W.G.Bagnall & Co., until the late 1890s.

As electric locos they each had twin trolley poles (as on a trolleybus) on the cab roof, but these are not now present. The use of twin poles meant that the running rails were not used for return current, so did not need to be electrically bonded.

These were not the only conversions carried out by Llechwedd. In the 1930s, they built a 4wPM loco out of a Morris Commercial lorry. They also had another overhead electric loco named Welsh Pony (converted from a battery-electric, and now preserved at the West Lancs Light Railway), which should not be confused with the FR loco of that name.

Jones, I.W. and Hatherill, G. (1977), Llechwedd and other Ffestiniog Railways