Chaired track was the only sort that FR PW volunteers experienced up to the completion of relaying of the Cob with Penrhyn Quarry Rail bullhead in 1969 (except for a short section of ex-WHR flat bottom track which was previously on the Cob). Chaired track, either bullhead or double head, had its own characteristics and working methods had evolved to suit. This article describes late 1960's practice.

Complete relaying started with dropping off alongside the old track the new materials of rails, sleepers, chairs, keys, fish plates, fish plate bolts and track screws. The old track was then lifted from the top end down using a works train consisting of a rail bolster set for the old rails, a bogie wagon for the old sleepers, and typically ex-RAFs for the chairs, spikes etc. The rails were disconnected by unbolting the fish plate bolts. If they could not be undone they were cut off using a chisel and set and a keying hammer. The track was then lifted using rail jacks and the sleepers knocked down with keying hammers to remove them from the chairs to which they were spiked. The sleepers were then removed from the track by impaling them with a mattock and dragging them out. If there was not enough room to slide them out to the side of the track then they were rotated through 90 degrees and lifted out from between the old rails. This track dismantling operation changed to incorporate unscrewing once chairs were screwed down from the mid 1960s relaying and re-sleepering onwards. With the rails now suspended in the air with the chairs on, the keys were knocked out and the chairs removed by turning them so that the outer cheek came off first. The materials were then loaded onto the train and it was gravitated down one rail length to allow the next rail panel to be dismantled. The track bed was then levelled by hand with mattocks and spades. The quantity of ballast was much less than in modern times and it was Hamburg Ballast.

The new track was laid by first putting in place the sleepers on the levelled track bed - 9 for a standard 24 foot rail. The two rails were then manoeuvred from the cess, where they had been dropped off, onto the sleepers. A mattock with the sharp spike inserted through the rail's fish plate bolt holes was often used to manoeuvre the rails. The rails were laid out almost touching with the heads innermost. The chairs were then placed along the outside of the rails with big four hole chairs touching the rail but a small gap left if they were smaller two hole chairs so that the chair centres lined up. The rails were then lifted to lie flat on the inner cheek of the chairs and then rolled into place with the foot down. The sleepers were then gently shovel packed by a pair of people working on opposite sides of a sleeper, often with a third person using a mattock or spade levered under the sleeper to raise it so the chair was tight to the rail. The gauge was checked and the track screwed down after drilling holes for the track screws. Both drilling and screwing were done by electric tools powered by a diesel generator mounted on an old iron slate wagon, but the final tightening was with a hand T-piece spanner. Track screws were dipped in a mixture of engine oil and creosote (called jou-jou) just before they were inserted in the chairs.

Re-sleepering used many of the same techniques with the rails left joined before they were jacked up to remove the old sleepers and chairs. This meant the works train had to be some distance away so the old track materials were picked up after the re-sleepering was complete. Old FR 'S' chairs were not re-used because the high inside cheeks were liable to strike the rims of the wheels of passing trains. All chairs were removed to Boston Lodge (later Minffordd) to have the holes slightly enlarged with a drill so that they could be re-used with track screws. The new sleepers had to be manoeuvred into place under the rails and the chairs were then placed on the rails and lightly keyed before the rails were lowered so the chairs sat on the sleepers. Hand packing and screwing down was then as for relaying. 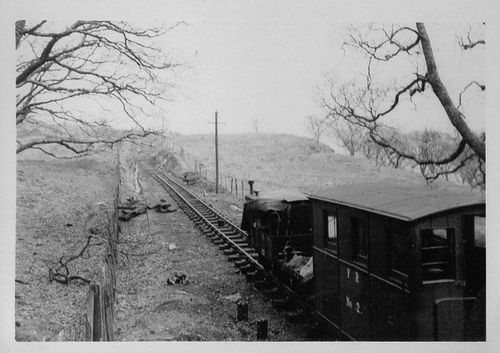 This is a typical late sixties relaying train at Coed y Bleddiau in 1967. Nearest the camera is Van 6 (Then No. 2 Van) and furthest away the slate wagon mounted diesel generator used to power drill, screwing machine and Kango Ballast Tampers. The relaying materials were dropped off before the old track was removed. The new track has been put together only part way to the remains of the old track near the next bend and there is bare trackbed ahead of the new rails. The chairs have been keyed and the sleepers have been shovel packed. Screwing down, ballasting, lifting, aligning and tamping remains to be done. The relaying train cannot be moved up to nearer the end of the new rails until the chairs have been screwed down.