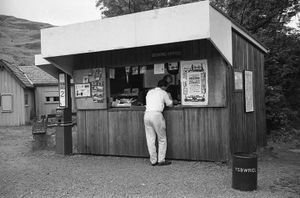 The Bunny Hutch was constructed by June 1965 when Norman Gurley took a picture from its roof while felting the new structure at Tan y Bwlch.[1] The Bunny Hutch was a wooden sales kiosk and acquired its nick name because of its resemblance to pet accommodation. The FRM reported in Summer 1965:[2]

"The facilities at Tan-y-Bwlch are being supplemented this summer by the provision of a sales kiosk. This was opened over Whitsun with encouraging results."

The Bunny Hutch was an important source of income to the FR selling tourist souvenirs etc. Not long after the reopening to Dduallt it was moved there and it eventually migrated on to Blaenau Ffestiniog (and previously Tanygrisiau?). It had moved to Dduallt by high summer 1968 for the Magazine reports that the ex-Welshpool & Llanfair cattle van (Van 59) had been used each weekend to convey supplies to Tan-y-Bwlch café and Dduallt kiosk. The Signals and Telegraph report for 1968 reported:[3] "Developments at the Upper Terminus will result in Clapham Junction (No. 1 Van) losing some of its present glory, as staff instrument and associated apparatus will be moved to the "Bunny Hutch" which somewhat late in the season "hopped" up to Dduallt, aided by Norman Gurley & Co. to promote Sales at the New Terminus."

Lack of space at Llyn Ystradau seems to have prevented it operating there in 1977 as the Magazine reported in Winter 1977/8 that staff shortages had affected the "Little Wonder Buffet" and Dduallt kiosk during August. The Bunny Hutch appears to have lasted at Blaenau until the new station awning and building was erected in 1989 - 90.[4] In early 1989 it was reported it was likely to become surplus for disposal on completion of the permanent platform buildings at Blaenau.[5] Its long nomadic life was a tribute to the cost-conscious economy of the FR in those days. 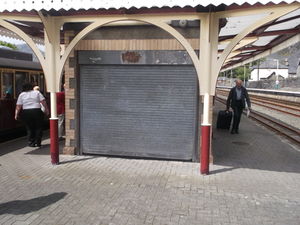 When the new Blaenau Ffestiniog station building was erected it included a roller shutter sales area which was christened the "Bunny Hutch" to reflect the wooden building it replaced. It is now used as a store as there is a larger shop/ticket sales area in a container building. In the Summer 2016 FR Magazine it was recorded that the roller shutter has been removed and the replacement concrete block wall rendered.