From Festipedia, hosted by the FR Heritage Group
(Redirected from C S Perrier)
Jump to navigation Jump to search 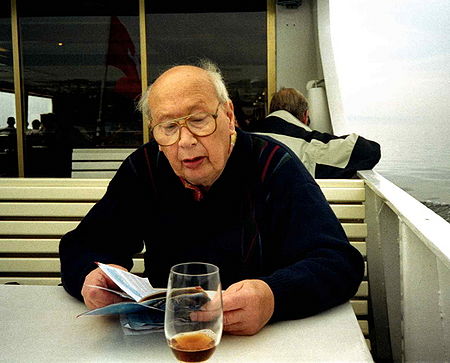 Cyril Perrier had a long connection with the Ffestiniog, stretching back to the days prior to the revival, and he claimed to be much younger than Alan Pegler.

He first visited the line during the closure period in 1950. With extensive overseas work, he only got round to joining the FRS in the mid sixties, by which time he had already spent a considerable amount of time photographing the line (see the links below).

He continued taking photos throughout the sixties and seventies on visits timed for special events, but as he had already covered most of the line, the number of photos diminished.

Although not borne out by any photographic preference, Cyril preferred Mountaineer, and had a soft spot for the Ladies (Linda and Blanche) and home grown Taliesin III.

His last visit was in 2004 for the Heritage AGM, where, with Adrian Gray, he arranged the 150th birthday celebration toast of the Tan y Bwlch bridge. It was a strange sight watching some 30-40 people walking off down the track to the bridge.

Amongst his photo logs are the following:

Other photos can be found at various locations on the wiki.

Some of his photos can be found at Category:Photos by Cyril Perrier