Blanche is a 2-4-0 saddle tank and tender locomotive operating on the Ffestiniog Railway. Originally built for the Penrhyn Quarry Railway, it arrived on the FR in the 1960s.

This powerful engine was built as an 0-4-0ST by the Hunslet Engine Company, Leeds in 1893 (works No. 589) for main-line service on the Penrhyn Quarry Railway, costing £800 new. She is one of a class of three, the other two being Linda and Charles. The latter is preserved in the museum at Penrhyn Castle. She was named after Blanche Georgina Fitzroy (1865-1944), who married Edward Sholto Douglas-Pennant (the 3rd Baron of Penrhyn), and is together with Linda also known as one of the Ladies. Blanche was sent from Hunslets on 29th June 1893. She had a new firebox in 1920 and a new boiler in 1925. A full height cab rear sheet was fitted in 1934. She was repainted in the 'new livery' in June 1936 (sky blue lining instead of chocolate brown). An axle broke in June 1937 and the boiler off Linda and a new firebox were fitted in October 1939. An all welded tank was fitted in September 1949 and a "new" boiler in 1956 although it is likely to have been a heavily reconditioned one. She worked the last steam trip over the Penrhyn main line on 27th July 1962.[1] Blanche was initially offered for purchase with a price of £2,500, a price considered too high by both the Festiniog Railway and Talyllyn Railway.[2][3] 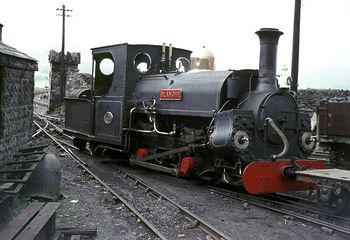 Not long after arrival on the FR, in close to original condition.

Blanche was purchased by the FR for £2000[2] in 1963 and arrived at the FR by lorry on 17th December.[4] During 1964 she operated in close to Penrhyn condition with the addition of a temporary tender, previously used by Linda and originally from Palmerston. Whilst this tender was in use a door was cut into the rear cabsheet, in the style of the England Engines. Other modifications included the change from right to left hand drive, the fitting of vacuum brake equipment and the adjusting of the wheel back to back dimension to fit the FR track gauge (Penrhyn gauge was 1 ft 10.5 in).[2]

For the 1965 season the cab roof was reprofiled as a result of clearance tests at Garnedd Tunnel, the cab rear sheet was removed and she was equipped with a new tender which incorporated an extended cab. The upper part of the original cab back sheet was reused in the tender cab, a fact which was confirmed when Penrhyn livery was found during a repaint in 2011. The lower part of the back sheet remains in the FR stores to this day. These modifications followed similar ones carried out on Linda the year before. Following the modifications Blanche was repainted in standard FR green, a colour she has retained ever since.

In the 60's Blanche had a prang in the woods, this location now carrying the name Blanche's Bump.

Following success with Linda, Blanche was converted to oil firing in April 1971. In November the boiler was removed and sent to the Midland Rolling & Haulage Co. where it was fitted with a new firebox and superheating. On return of the boiler, she was rebuilt as a 2-4-0ST+T (saddle-tank tender engine) with extended frames and new piston valve cylinders. The pony truck fitted as part of the rebuild used a pair of wheels from the rear bogie of Single Fairlie Moel Tryfan, the other pair of wheels having already been used for a pony truck for Linda.[1]

Blanche was used on the Welsh Highland Railway (C) between Dinas and Caernarfon in 1999, returning to the Ffestiniog Railway and requiring heavy maintenance in 2000. She was withdrawn from service when her boiler ticket expired in March 2003. Despite her status as a "traffic" engine, not part of heritage fleet, the parlous state of the company's finances required extensive fundraising for a new boiler, but following a large number of donations she returned in May 2005. Blanche received an overdue repaint in 2011.

In 2014 Blanche featured on a stamp issued by the Royal Mail as part of a a series celebrating "Classic Welsh Locomotives". The photo used was taken in 1964 and featured the loco still in Penrhyn condition with temporary tender and wearing the Y Cymro headboard.[5]

Blanche's boiler certificate expired in 2016. Her final train was a special from Porthmadog to Tan y Bwlch on the evening of 1st May. As part of the overhaul the ex-Moel Tryfan pony wheels were replaced. The old wheels were sent (along with those from Linda) to the WHHR for display alongside Moel Tryfan's bogie frames. Blanche was reassembled over 2017, with assistance provided by young volunteers during the annual training week.[6] She was out on test at Harbour Station on 22nd November[7] before double heading with Prince to Hafod y Llyn.

Blanche is affectionately known by those who work on her as Ricket.

The engine also has a support site, aptly entitled Ricket Rescue, which detailed her return to active service.