Linda is a 2-4-0 saddle tank and tender locomotive operating on the Ffestiniog Railway. Originally built for the Penrhyn Quarry Railway, it arrived on the FR in the 1960s.

This powerful engine was built as an 0-4-0ST by the Hunslet Engine Company, Leeds in 1893 (works No. 590) for main-line service on the Penrhyn Quarry Railway, at a cost of £800. Linda was sent from Hunslet on 6th July 1893, named after Linda Blanche Douglas-Pennant (1889-1965), the daughter of Edward Sholto and Blanche Georgina Douglas-Pennant. Sister engine Blanche was named after her mother and together they are also known as the Ladies. A full height cabsheet was fitted in 1905 and a new firebox at this time. She had another new firebox fitted in 1921 at Leeds. The driving axle was straightened in 1931: it was then to break twice in 1934 (replaced with one off Blanche) and in March 1954 when a larger one was fitted. Linda was fitted with a new boiler in April 1936 returning to traffic in 1937. She was stored at Port shed from 24th August 1940 to 18th May 1950 and received a welded tank in January 1951. She had a derailment on 8th October 1958 and worked her last trip at Penrhyn on 11th July 1962 (breaking down at Felin-Hen).[1] Linda was initially offered for purchase with a price of £1,500, a price considered too high by both the Festiniog Railway and Talyllyn Railway.[2][3] 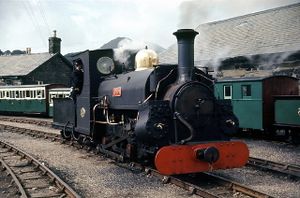 Second season on the FR, in close to original condition, 1963.

Linda was hired by FR for £50 per week, arriving at Minffordd via B.R. on 14th July 1962. The journey from Port Penrhyn was carefully planned to ensure she arrived on the FR facing the right way. She was first steamed the following day.

Here is an eye witness account of her arrival:

"Yes I remember 1962 very well. Linda arrived on Saturday 14th July 62 at about 6.30pm into Minffordd sidings. PAD, myself and several volunteers soon had Linda jacked up and greased steel sheets slid onto the Lowmac wagon and onto the wharf. A block and tackle with a sturdy steel wire around a tree , and a few good heaves soon had Linda above the FR rails. Then with Moelwyn shunted into the station before going down to Blodge.

The next morning I was asked to clear out the firebox of her last PQR fire and top the boiler with water. A fire was lit 10 am. and a slow time raising steam till 4 pm. The photo showing Linda arriving at Minffordd shows Bill Hoole, PAD. and myself riding on the balcony of the first coach. No vacuum brake and a chain link coupling. The guard was Alan Heywood, and John Dobson. The test continued to Mile Post 5. And as the water level in the tank was very low the test was abandoned, and returned to Blodge.

On 5th September 1962 she derailed rather spectacularly in the area of Squirrel Crossing/Cutting Budr due to the wheels being set for the narrower Penrhyn gauge (1 ft 10.5 in). The event/location have since become known as Linda's Leap. For the 1963 season Linda was regauged, fitted with vacuum brakes, the cab backplate removed and equipped with a temporary tender in the form of waggon 38 (previously Palmerston's tender).[2]

She was purchased by the FR in December 1963 for the sum of £1000.[2] For the 1964 season the cab was reprofiled as a result of clearance tests at Garnedd tunnel. At the same a time a "new" tender was fitted, this was the one formerly coupled to Welsh Pony (and before the Little Giant) which was rebuilt and widened for use with Linda.

Allan Garraway regarded Linda as his personal engine until he stopped driving. 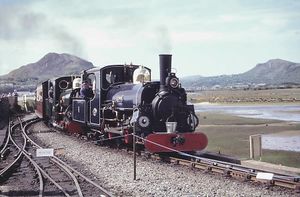 In midnight blue livery with Blanche at Pen Cob, 1993.

In 1969, she was fitted with superheating by the original manufacturer, Hunslet Engine Company. In 1970 she was rebuilt again, this time as a 2-4-0STT (saddle-tank tender engine). The pony truck fitted as part of the rebuild used a pair of wheels from the rear bogie of long scrapped Moel Tryfan - the other pair of wheels later being similarly used for a pony truck for Blanche. In October 1970 Linda was converted to oil firing using the Laidlaw Drew system, to reduce the chances of lineside fires, the rest of the main fleet locomotives were converted in following years.[5] Initially the smokebox was painted sliver as no black paint had been found that could withstand the higher temperature of oil firing.[2]

In 1985 Linda was rebuilt with a gas-producer coal firing system, Lempor exhaust and various other "modern steam" features. Most of these features were short lived with the loco reverting to oil firing the next year.

During Winter 1990/91 Linda underwent a major overhaul, which included a new aluminium (removable) tender cab. The society magazine carried the following describing works carried out in the Workshops:[6]

Much time has been spent on Linda, addressing many outstanding jobs: the reverser quadrant has been strengthened and a crack in an adjacent mounting angle repaired; play between the valves and buckles has been eliminated; valve spindles have been remachined to suit; new neck rings and front cover guides have been fitted; die-blocks have been 'built-up' and remachined and valve gear taper-pin bushed have been replaced. Furthermore the front coupling and drawbar assembly has been rebuilt and modifications have been made to the tender suspension and engine-tender drawbar and buffer. Perhaps even more earth-shattering is the fabrication of a new (removable) aluminium tender cab section, long requested by the engine crews, and a full repainting of the engine in Midnight Blue, lined white. Students of modern history may be interested to know that, whilst in the process of preparing for this first full repaint since 1971, much of the Penrhyn livery was uncovered (and then mostly sanded off!), revealing it to be very thin, seemingly hastily applied and altogether rather a rough job. 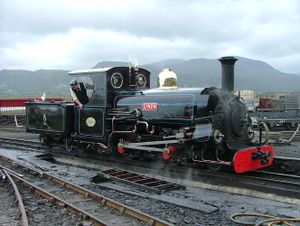 Linda over the Long Shed Pit at Boston Lodge, 2004

Following another overhaul between 1995 and 1996 Linda emerged in Penrhyn black livery for the first time since 1964. For her first weekend in service (the October vintage weekend) she ran with the cab backsheet fitted and an oil tank hidden in a wagon in place of the tender. The original sandpots were also refitted. On 4th May 1997 the left hand connecting rod fractured at the big end along an old hairline crack. The rods were repaired by welding to both repair the fracture and build up new material. Linda was back in service by the end of July.[1] For the 1997 winter season the new, more capacious, sandpots were refitted. This popular machine continued to work on the FR until withdrawal in late 2004 with a badly leaking tube-plate. During this period the locomotive made its first visit to the WHR for Adventure Week in May 24-30 2003.

Repairs were delayed, and priority was given to sister locomotive Blanche, and as result Linda was stored to be completed as a volunteer project. This progressed steadily until eventual completion early in 2011.

Linda has changed much over the years, and during this overhaul the opportunity has been taken to restore as much of the locomotive as practically possible to its original specification including:

Following extensive trial runs and running-in (including a trip to Caernarfon!) during March and April 2011, Linda returned to traffic on the 1140 departure on April 26th 2011.

On the 4th June 2011 Linda departed Wales for the first time since delivery to visit the private Statfold Barn Railway in Staffordshire.

Previously operating in unlined black, a surprise move by the Linda restoration team saw the loco lined out in Penrhyn livery, original sandboxes,vacuum pipes and the tender removed and the backsheet added for a brief period before the repaint in in July 2011. A clever use of a small oil tank on the cab floor, and a 'long range' tank hidden in a slate wagon enabled Linda to operate as a tank engine again on a train of slate wagons. After this the tender was recoupled and Linda was repainted in green livery, similar to Blanche who was receiving a repaint at that time.

In August 2013 Linda was converted back to coal-firing. In 2017, as part of an overhaul the ex-Moel Tryfan pony wheels were replaced. The old wheels were sent (along with those from Blanche) to the WHHR for display alongside Moel Tryfan's bogie frames. In 2018 the ex-Moel Tryfan axleboxes were also removed and replaced with new ones in fabricated steel.[7]