From Festipedia, hosted by the FR Heritage Group
(Redirected from Colonel Campbell)
Jump to navigation Jump to search

Colonel Andrew Campbell, late of the legendary Scottish regiment the Black Watch, purchased 15th–century Dduallt Manor in 1963 and lived there until he died in February 1982. He substantially improved the Manor, adding his own private siding at Campbell's Platform and installing an aerial ropeway to deliver supplies down the hill from the platform shelter to the manor, prior to construction of he road.[1] The motor and pulley wheels were still visible in 2005. The FR allowed the Colonel running rights over then dormant Tan-y-Bwlch to Dduallt section in his private locomotive (named after his death as The Colonel), as there was no road access to Dduallt Manor until 1981. He was made famous by the BBC film "The Campbells Came by Rail", featuring his commute from Caernafon to Tan-y-Bwlch.

The Colonel was a keen Deviationist from the start, allowing a barn next to the Manor barn to be used as the original Mess, prior to the establishment of Tunnel Mess. He had a license to handle explosives and acted as unpaid shot firer for the New Works. He also allowed his locomotives to be used by the Deviationists.[2][3] 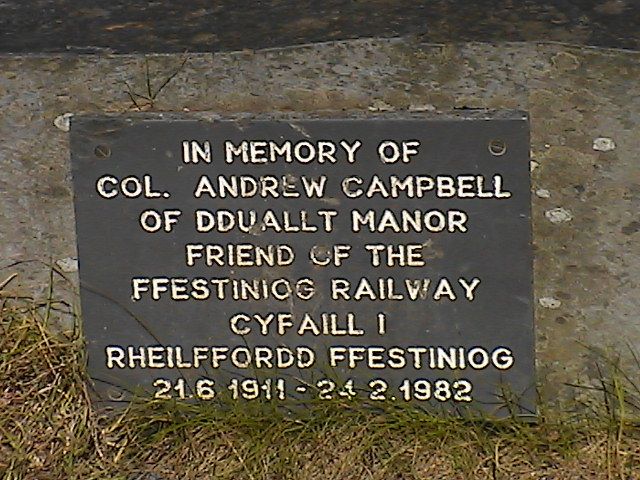 A Plaque dedicated to the Colonel is at Dduallt