David Lloyd George was the fourth locomotive to be built by the Festiniog Railway Company in its own workshops at Boston Lodge and the sixth FR Double Fairlie. It carries its name (after the former Liberal Prime Minister who was brought up locally and travelled on the FR) in English on one side and in Welsh (Dafydd Lloyd George) on the other side. It is locomotive number 12.

It was completed in 1992 as a modern locomotive but with a traditional outline. As originally built it burned fuel oil and was running on a pair of old bogies with some parts dating back to the Victorian era. It has recently been rebuilt with coal firing and a pair of brand new bogies to the latest specification. 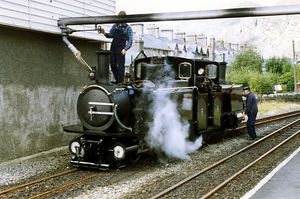 David Lloyd George at Blaenau Ffestiniog in as yet unfinished condition

In 1989 the Ffestiniog Railway successfully gained grant funding for a development programme known as the INCA Programme. Although this financed various projects on the the FR, the largest was the construction of a brand new Double Fairlie locomotive. Originally the intention was to provide a new boiler to replace one of the Hunslet boilers fitted to Merddin Emrys and Earl of Merioneth, which had recently started to exhibit cracking of the throat plates. The scope of the project eventually expanded to the building of a new locomotive.

The new locomotive was to be to a new design but following the traditional Spooner outline of the Fairlies of the 1870s and '80s. The locomotive featured a completely new tapered boiler design. This boiler avoids the raised firebox of the Hunslet boilers and thus the issues with cracked throat plates. The length of the boiler was also reduced with the aim of getting the proportions closer to those of the old wagon-top boilers. It was designed from outset to be oil fired so has a larger number of narrower tubes than the Hunslet boilers. It is also fitted with a higher degree of superheat than previously used. The boiler design was developed from the Boston Lodge specification by Bob Meanley of Tyseley Locomotive Works in Birmingham and was made by Bloomfield Steel Construction Co., Tipton. The boiler inspector required that the boiler should be of all-welded construction and use direct crownstays at the firebox rather than the sling stays and girder bars used on previous Fairlie boilers.

The design of the locomotive's superstructure takes cues from Merddin Emrys and Livingston Thompson as built. The tanks, although appearing like the traditional design, were to modern specification. There are no well tanks (the valance beneath the cab is purely decorative). Additionally one of the engine side tanks was reserved exclusively for fuel oil.[1]

The superstructure of the locomotive was nearing completion at the beginning of 1992 when, during a boiler overhaul, cracking was discovered in Earl of Merioneth's throat plates. In order to ensure two Double Fairlies were available for the main season it was decided to put David Lloyd George into service on Earl of Merioneth's bogies: its own were not yet complete.

David Lloyd George entered service in July 1992. It was still incomplete, missing the cab roof, dome covers and sandpots and was painted in unlined black. Later in the year the locomotive was finished and painted in a lined red livery prior to its naming in April 1993.[1]

For the first ten years of operation David Lloyd George proved to be a very efficient and reliable machine, providing the backbone on services for most of this period. The locomotive didn't miss a single season. In 2002 it received its first major overhaul which included a retube of the boiler and replacement of some broken crown stays. The direct crown stays have proved to be prone to cracking and future double engine boilers will revert to sling stays and girder bars.

From 2002 the use of the locomotive declined, the two factors being the power bogies which were the oldest set still in use on the railway and the fact it was oil fired when coal firing was proving significantly cheaper.

In 2010 an appeal was launched to build two new bogies to fit under DLG. These bogies use the monoblock cylinder design and piston valves as on Taliesin. Piston valves are more suited to the higher degree of superheat used on these locomotives. The frames were erected, and motion parts being machined in spring 2011. The first of the cylinder blocks was machined in May 2012.

Use of David Lloyd George continued to decline, with 2012 being all time low; despite being "in-ticket" the locomotive only worked the equivalent of two round trips to Blaenau Ffestiniog in the course of the entire year, one of these being a special train carrying in the Olympic Torch on the 28th May 2012. David Lloyd George's bogies were removed in February 2013 and fitted to Earl of Merioneth because, despite being the oldest in use, these bogies were considered in better condition as Earl of Merioneth had seen very heavy use.

Second rebuild and conversion to coal[edit]

The boiler was stripped and retubed. Broken stays were renewed and new stainless steel superheater elements and smokeboxes fitted. The locomotive was converted from oil firing to coal. The conversion included remodelling the side tanks to include bunkers. The bunkers are smaller than those on the other double engines so 'greedy boards' are fitted to allow coal to be piled high above the tank tops.

By November 2013 the boiler was back in the cradle with its cladding fitted and painted in the distinctive red livery and work continuing on the bogies and starting on the tanks. During Winter 2013 and early 2014 the locomotive was reassembled with both its bogies on their wheels with valve gear fitted. New taller chimneys were fitted, and new works plates on the sides of the new smokeboxes.

The engine returned to service in May 2014, temporarily painted in grey to imitate the early state of Taliesin in 1957. In 2015 David Lloyd George was repainted back into the well known red and re-launched at the May Day Bank Holiday gala.[2]

Issues were experienced with the new bogies: these were eventually traced to casting sand from the new cylinders being stuck inside and wearing out the liners.

Because the boiler is designed to operate at a higher pressure and has a greater degree of superheat than any other double engine boiler David Lloyd George is the most powerful steam locomotive ever to run in normal service on the Festiniog Railway.