Geoff was born in Sheffield in March 1949 into a family of railway enthusiasts. His father had become interested in his early teenage years, cycling from Sheffield to Doncaster with his uncle to peer over the wall of 'The Plant' to see what the newest Gresley Pacific was. His father realised that he had missed all sorts of wonderful older engines by 'starting too late!' Accordingly, he decided that Geoff should start the hobby as soon as possible, so as soon as he was out of nappies, off Geoff went; his first visit being to Immingham MPD at the ripe old age of two! 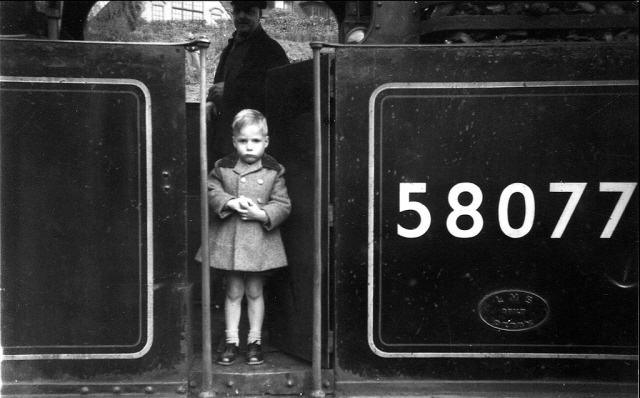 This photo is of Geoff on the footplate of Midland 0P 0-4-4T No. 58077 at Wirksworth station during the joint SLS/MLS "High Peak Railtour" on 25th April 1953. Geoff's father thinks the photo may have been taken by W. A. Camwell but cannot confirm this, the photo itself is not marked in any way.

His father was instrumental in setting up a branch of the RCTS in Sheffield, so many shed visits and Railtours were undertaken, Geoff was lucky enough to see such things as Midland 3P and compound 4-4-0s at Midland station as well as 'Directors' and such like at Victoria station in Sheffield. Many trips were undertaken and family holidays were usually railway orientated, North Wales and the Isle of Wight being favourite destinations.

Geoffs family moved away from Sheffield in 1957 when he was eight years old, as even in those days if you wanted to further your career you had to be prepared to move around, and his father got a new job in London. The family moved (by train of course in those days!) to Harrow Weald, not a million miles from the West Coast Main Line between Harrow & Wealdstone and Headstone Lane stations, where 'Duchesses' and 'Princesses' could be seen on a regular basis amongst the 'Scots' and 'Jubilees' etc. Happy Days! There were still LNWR 0-8-0s around on some of the freights.

Geoff had first come across the FR on a family holiday in 1956, when they rode behind 'Prince' as far as Minffordd, then the limit of operation in those pioneering days. On passing his 11-plus exam he went to Harrow Weald County Grammar school where he met several like minded souls, including Chris Ellicott, who was also keen on the FR. Geoff became interested in photography whilst still at school and his parents bought him his first camera (a Voigtländer Perkeo1 2¼" x 2¼" folding camera) for his 13th birthday, and thus his interest in photography was boosted, leading eventually to his career as a television cameraman.

He joined the Ffestiniog Railway Society in 1963, his first independent visit being aboard the FRS Special from Paddington to Minffordd and Porthmadog, the initial part of this run to Ruabon being behind 'Flying Scotsman' on its first main line outing in preservation. It was also his first outing with his new 35mm Voigtländer Vito CLR camera, given to him for his 14th birthday and loaded for the first time with colour slide film!

His first volunteering effort was in summer 1964, during the school holidays and when he was 15 years old, in theory too young as I think you had to be 16 for insurance purposes! Geoff had been on a family holiday and stayed on for two more weeks to work in the P-way department, helping to relay the three-way stub-point from Porthmadog Harbour station in Glan-y-Mor yard at Boston Lodge. He stayed in one of the B&B guest houses in Minffordd and inevitably spent much time at Lottie's Crossing' house! His father had known Bill Hoole when he was regular driver of A4 60007 'Sir Nigel Gresley' at King's Cross 'Top Shed' and it was good to see Bill enjoying his retirement on various FR footplates.

Chris Ellicott and Geoff then joined the London Area Group of the FRS and so started many trips to the railway, both summer and winter weekends, with the likes of Ron Fisher, Ron Walker, Phil Hawkins, John Cosford and many other characters! They worked under the auspices of Ron Lester, Fred Howes and Norman Gurley, and as well as achieving some improvements to the track, also had a very good time!

This went on for some years whilst Geoff was still at school, then he joined London Weekend TV in 1968 as a trainee cameraman, remaining there until they were all made redundant by Granada TV in 1997, since when he has been a freelance cameraman. Steam had finished on BR in 1968, and with his increased disposable income he started travelling abroad in search of steam, now armed with Pentax SLR cameras. He was often accompanied by Ron Fisher and Chris Ellicott, with whom he also shared a flat in Sudbury and then in Harrow. This activity rather curtailed visits to the FR, and as the railway became more commercial, so some of the 'pioneering' spirit declined. He joined the North Yorkshire Moors Railway Society which was in its infancy and started PW work there as well, though the track components were a lot heavier! He also became involved with the group who bought the Lambton 0-6-2T No. 29, though purely in an 'armchair' capacity. He's still involved to this day.

Inevitably, marriage and a family curtailed activities somewhat, though his wife Jackie is very understanding and encourages his interest which these days is mainly photographic, though very occasionally he gets the chance to do a bit of railway modelling as well.

He is currently (June 2006) in the process of scanning some of his 30 odd thousand slides for his internet photo gallery here (and has started taking digital pictures as well). He is proud that some of his shots have been added to the FR Heritage Wiki, hopefully for all to enjoy!

Although his membership of the FRS lapsed in the mid 1970s, his father is a life member 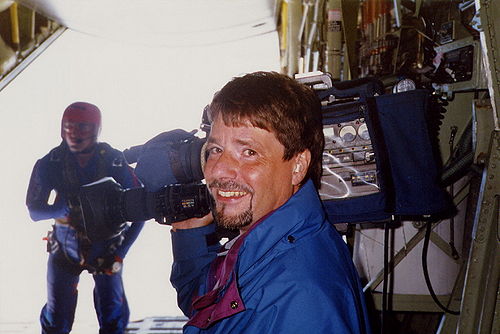 Geoff on location for "Blind Date" filming in the back of an RAF Hercules with the RAF Falcons parachute team over Blackpool in July 1996. It was taken by sound recordist Kevin Amos, who was Geoff's regular "partner" on PSC Crew 3 at London Weekend TV from about 1991 to 1997 (and afterwards as freelances)