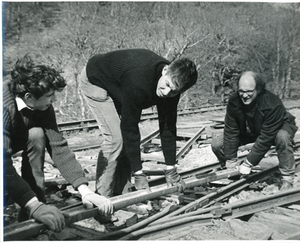 Gerald Fox on the right volunteering on the FR Deviation in April 1968 Photo: via iBase Festiniog.

Gerald Fox, light railway engineer, (b. 1940) educ. Marlborough, where he built some small bridges as a schoolboy, MA Cantab., PWE (Public Works Engineer USA), surveyor and early Engineer of the Festiniog Railway's Deviation 1961-68. His name appears on the Deviation Stone on the Spiral at Dduallt. He thought of the scheme for the Spiral.[1] He was involved professionally in construction of London Underground's Victoria Line at Oxford Circus Tube Station, a nuclear power station in Anglesey, a silver mine in Yukon, the Bay Area Rapid Transit of San Francisco, the Trimax (tramway) of Portland, Oregon (with a spiral on the Airport branch) and the Lake Oswego Trolley, a volunteer-run tramway in the same city. Having secured the services of a labouring gang from the local penitentiary, he was notable in persuading the screws to join the fun.