Philip John Greer Ransom was born and brought up in Northamptonshire where his father was a farmer[1][2]. His early railway education was gained beside the L.M.S. main line near the site of the Blue Boar M1 Services which became so familiar to early LAG working party participants. His wider family was involved in the supply of pharmaceuticals with a firm in Hitchin founded by his grandfather. John's family moved from Northamptonshire to Voelas, a farm beteen Aberystwyth and Machynlleth and hence the development of his interest in the Welsh narrow gauge.

His school education was provided by Eton. An apprenticeship on narrow gauge track work in the early days of the Talyllyn kept him in touch with moves to reopen the FR and he was among the first 100 people to join the Society in 1954. He participated in the first LAG working party (1956), was elected to the Group committee (1957), Group Secretary (1958 - 1964)) and the Society Board (1964). He became the Society's Correspondence Secretary in 1965. [3] In the same year he then went on to buy and import into the UK the American Locomotive Company 2-6-2T Works No. 57156 from the recently closed Tramway de Pithiviers à Toury. This locomotive came to the FR in 1967, where it became Mountaineer.

He told the story of the purchase and import of the locomotive in the Summer 1966 issue of the Festiniog Railway Magazine (issue 33). This was one of a very large number of contributions he made to the Magazine including many 'pen portraits' of people involved with the FR. His last contribution (in issue 133) was the then scandalous story of the relationship between Robert Francis Fairlie and George England's daughter.

After National Service he worked in the packaging industry before becoming a journalist working for a magazine about packaging. He then became a writer of books about railways and canals.[4]

John was an active volunteer for many years on the operating FR and in addition worked on the Deviation. As the picture below shows he was still working with the PW Department in 1978.

He and his wife Libby moved to Lochearnhead in Perthshire in 1977.

John had a number of books published, mainly dealing with railways, canals and Scotland. His "Narrow Gauge Steam", published in 1996, was reviewed in FRM 154, the reviewer's opening remark being that "this book deserves a place on every Festiniog supporter's bookshelf, right up there alongside Boyd's".

John had a wide interest in railway preservation. He was, from 1974, on the Council of the Association of Railway Preservation Societies which later became the H.R.A.. He was chairman of their committee which determined which society should receive the annual award and he was secretary of the H.R.A. Scottish Committee until 2015. 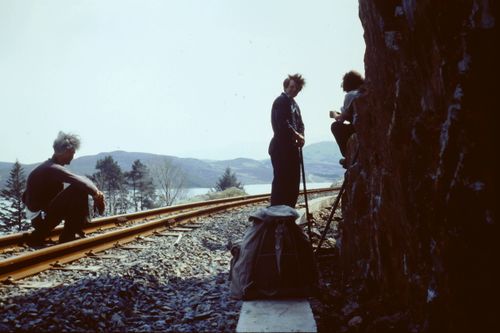 John Ransom sitting on the high rail with a group of other PW volunteers near the Summit in May 1978.