Midge Site, now known simply as Midge, was a Deviation construction site behind Rhoslyn lake between Dingle & Rosary, where work started in summer 1968, before either of those sites. It consisted of cutting a ledge into the hillside through the woods, tipping the spoil into a gully to the south to form an embankment which later joined up with Dingle Site. 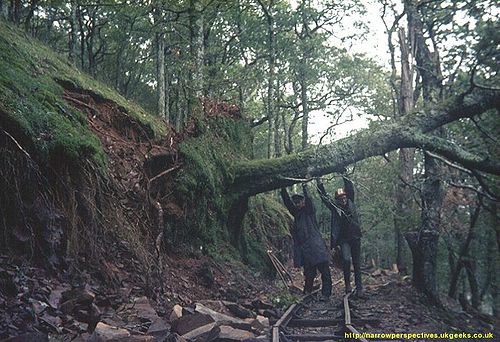 (I seem to remember - I was not there - that two of the ladies were intent on cutting down this tree and waved away all offers of assistance. They dug and chiseled until they could not understand how it could remain upright. They decided to have lunch and as soon as they had turned their backs, the tree fell with a tremendous crash. The two blokes in the picture had nothing to do with it. Or so I heard. Pedr.)