Monster is a small four-wheeled 15hp diesel locomotive with drive on both axles. It was built by the FRS's North Staffordshire Group in 1974 utilising a skip frame, incorporating parts of a Lister Road Truck from Crewe Railway Workshops and an Enfield boat engine.

Arriving on the railway by May of that year, the little locomotive was intended for use on the Deviation but proved to be not very suitable. With the acquisition of a replacement Lister locomotive, Sludge, in mind, it was sold to Rich Morris of Blaenau Ffestiniog, departing on 2 May 1976. It was later exhibited at the Gloddfa Ganol Narrow Gauge Railway Museum at Oakeley Quarry.

Following the closure of Gloddfa Ganol, Monster was reacquired for the FR in 1998.

A small group of volunteers started restoration in the summer of 2007 when the loco was moved to Boston Lodge by Britomart.

As of August the clutch and gearbox assembly have been overhauled as well as the brakes and some other minor cosmetic work. The TA Royal Engineers then stepped in to restore the engine, and it was seen operating at the end of their visit.

In February 2010 a spare engine was sourced for parts including a vital fuel pump that was deteriorating on the original engine. Also the fuel system was re-plumbed and new exhausts were made. A coat of photographic grey paint was applied (spare left over from Beyer-Garratt 87) and the Monster ran again.[video 1] 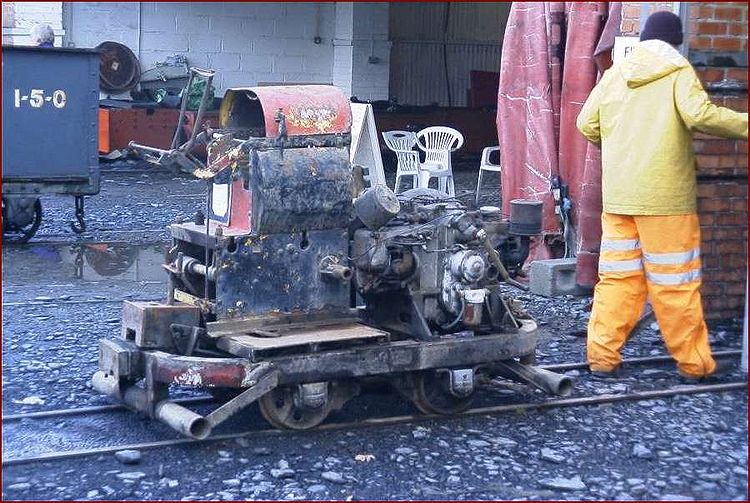 Monster at Minffordd Yard on 8 October 2000.