87 is an NGG16 Garratt locomotive which is in service on the Welsh Highland Railway.

Laid up at Donnybrook

87 was built by John Cockerill of Seraing, Belgium for South African Railways to their 2-6-2+2-6-2T NGG16 Garratt design. This loco was fourth of the first batch of NGG16s built in 1936. It carries the works number 3267. The early NGG16s were originally classified as part of the NGG13 class.

87 was delivered to Port Shepstone in 1937 and is believed to have worked their until 1968. After this it seems to have worked on the Natal branches. In 1972 it was in service at Donnybrook when it was derailed on a sharp curve. The derailment resulted in the entire locomotive lying on its side and it is believed at least one of the locomotive crew was killed. In 1977 87 was fitted with its current boiler, which was originally fitted to NG58, the pioneer NGG13.

At the time of closure in 1986, locomotives No. 87, 109, 113 and 153 were on shed at Ixopo. 87 was to haul to last train on the branch, but a hot box prevented this. 109 later found its way to Exmoor, where it stayed until its purchase by Pete Waterman, while 113 and 153 were sold to the Midmir Historical Village in Natal, where they remained until 1998 when both locomotives passed into the ownership of the Sandstone Heritage Trust. Both 113 and 153 are now operational on the Sandstone Steam Railroad. 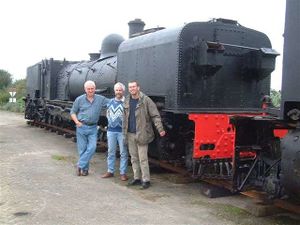 This image from Ben Fisher's Official WHR(C) Project Website shows 87 at Exmoor in September 2005, during one of a number of inspection visits. The gentlemen concerned are (left-right) Tony Williams (FR/WHR Loco Inspector), Steve McCallum, & Jon Whalley (FR/WHR Chief Mechanical Engineer). Steve will project manage the rebuild of this loco, as well as looking after the FR/WHR coal firing conversion project.

87 was imported to the UK from South Africa for the abortive Robin Hood's Bay scheme in North Yorkshire, from which the WHR had previously acquired NG15s 133 and 134. 87 subsequently found its way to the Exmoor Steam Railway from where it was acquired by the WHR in 2006. The purchase of the Robin Hood's Bay NGG16s had not been pursued at the time of the NG15 purchase owing to their condition. However, a donation was made to the Festiniog Railway Trust by a private sponsor for this specific locomotive cover the costs of purchase and overhaul. 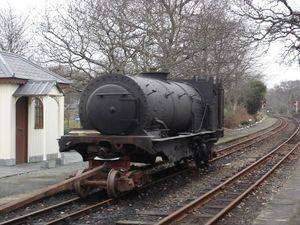 The boiler unit of NGG16 87 at Minffordd

87 was purchased for the Welsh Highland Railway by a private sponsor, who also funded the restoration. The addition of this locomotive made sure that there was an adequate fleet in place ready for opening of the complete WHR in 2009, giving three working NGG16s to form the core WHR fleet.

Number 87 arrived at Minffordd Yard on the morning of 4 February 2006, with the boiler unit being transferred to Boston Lodge the same day. In April 2007 the boiler was taken off the carrier frame and brought into the works for inspection and repairs.[1] The overhaul was completed at Boston Lodge, largely using paid staff and the project was managed by Steve Macullum. Modifications for operation on the WHR included fitting mechanical lubricators, steam sanders, a rocking grate and spark arrestors.

87 was outshopped in 'light aircraft' grey in January 2009, and was tested on the FR across the cob and around Harbour Station. During this time it took part in tests and training for the planned operation of WHR trains at Porthmadog. It also took part in the "Golden Bolts" ceremony to mark the connection of WHR rails to the FR. Following this it moved to Dinas over the newly complete line before entering WHR service in March. 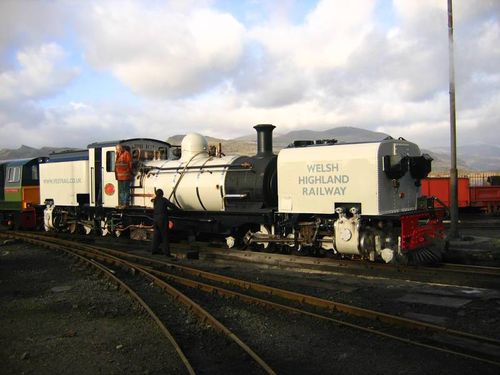 On Shed for testing, late January 2009

In January 2010 it returned to Boston Lodge for a repaint into its final livery of "Midnight Blue".[2]

87 ran over 14,000 miles during 2010, being the mainstay of the WHR service. During its winter overhaul thieves broke into the shed at Dinas and stole various non-ferrous parts. This delayed 87's introduction back into service in 2011, and also that of no 143, as parts had to be re-made at Boston Lodge.

During winter 2012 87 was split from its power units and wheels were turned and tyres replaced after 4 years of service on the WHR. Following the reintroduction of 138 into service 87 had its workload reduced slightly. There were also plans to wire the locomotive with electric lighting utilizing the recently fitted Stone's headlamps.

87 experienced issues with cracking of its mainframes, something that the other Garratts have not experienced. The frames were repaired by welding and the frames have since been rebuilt to the sturdier design used on the later locomotives.

87's boiler ticket expired in October 2018. Dismantling began immediately so that the boiler could be removed straight away and be sent for repair at Israel Newton's works, hopefully allowing a speedy return to service.[3] The boiler had its hydraulic test in February 2019[4] and was returned to Dinas in May before being refitted to the frames.[5] In February 2019 it was announced that the locomotive would be painted in South African Railways black livery complete with SAR/SAS markings.[6] The rebuild has included modifications to the braking system to bring it inline with the other NGG16s. This work has included moving the handbrake from its previous position at the back of the cab to a new position at the side. Consequently the cab has been modified to provide the required cut outs.[7] By July work on reassembly was at an advanced stage and much of the repainting work was complete.[8] As of September 2019, 87 was hoped to be reassembled and working over Christmas, [9] however, at Christmas the loco was not yet complete and Garratt 138 was used instead. By Mid-October 2019 the cab had been repainted, arrived at Dinas from Boston Lodge and was fitted to the loco. The smokebox and much of the boiler cladding had also been fitted. By the end of the month the tanks and all the boiler cladding was fitted and painted. By February half-term 2020, 87 had been completely re-assembled and repainted. It was used over the February half-term where a WHR service was in operation. Its first public train after overhaul was the 10:00 from Caernarfon on Saturday 15th February.