At the top of the hill in the centre of the spiral, a plinth was constructed of stone setts lifted from Weigh House Crossing on approach road to Minffordd Exchange Sidings. (The setts can be clearly seen in the photographs of Weighouse Crossing in 1946[1].) The job of constructing the column by doing the (brick) sett laying was done by Tom Davies the engine driver and Huw Williams - with mortar mixed by volunteers and wheelbarrowed up the hill from the station. On the top is an engraved slate slab indicating the height and direction of the principal peaks and other points of interest visible from the hill. On 10th April 1970 the General Manager, Allan Garraway with Company Directors and other officials in attendance introduced the donors, Mr and Mrs Walker of London, and Mrs Walker unveiled the Orientation Table. The ceremony over, the slab was removed for safe keeping, pending arrival of a vandal-proof protective cover. The unveiling is reported with a picture in FRM No. 49[2] and FRM No. 50 shows a photograph of the engraved slate viewpoint table which was protected by a Perspex cover in a steel framework.[3] 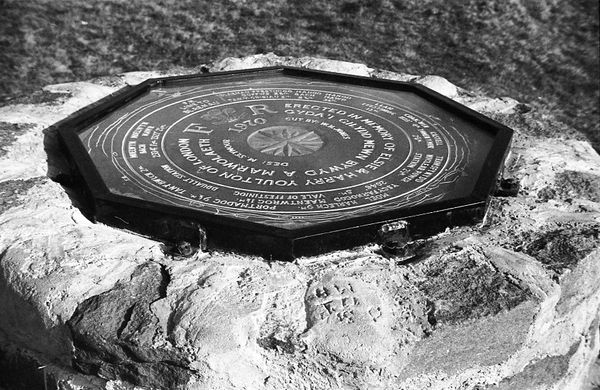 Picture of the orientation table's engraved slate top taken within a year of its unveiling in 1970. Photo: John Ryan.

The hillock on which the orientation table stands was a busy spot when trains terminated at Dduallt from 1968 to 1977 but has since become rarely visited.