From Festipedia, hosted by the FR Heritage Group
(Redirected from Pen Cob)
Jump to navigation Jump to search

Pen Cob (English: End of the Cob) is located at the other end of the Cob from Harbour Station.[route 1] It is the location of the junction leading from the Ffestiniog Railway into the main part of Boston Lodge Works. In earlier days there was a token station here and during the first years of the revival there was a halt serving the works. 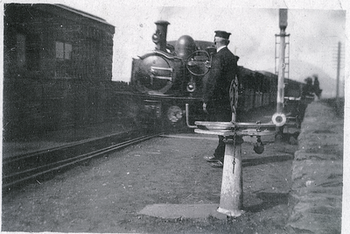 In use as a token station c. 1922. The column behind the disc signal quadrant is one of the FR Point Indicators. Photo Tom Davies via iBase Festiniog.

It was known as Boston Lodge Junction in pre-preservation days. Until the granting of a light railway order in 1923, there had been a manned signal box with block instruments and electric train staff installation. See the picture to the left for a view of a staff exchange taking place at speed. This was published in Ffestiniog Railway Magazine - anonymously but almost certainly by Dan Wilson since the photograph was attributed to Tom Davies and Dan used to stay at Bron Madoc. The signal box was a block post and had up and down distant signals on the main line. The points were of the hold-over weighted variety without locks and the distants were Disc Signals of which the capstan of one can be seen in the foreground. The signal box was therefore a zero lever one with a block instrument - miniature electric train staff after 1912 - and a fire for making tea. It had two shift working signalmen. The signalmen apparently thought themselves a distinct cut above the works men, although in latter days they were meant to double up oiling the stock that happened to be in the Paint Shop. Whenever anything dirtier needed doing they would remember there was a train due. After the 1923 Light Railway Order the staff locked points were put in and the frills were done away with. There was no staff instrument to lock away or provide staffs and the theoretical staff-and-ticket system for light engines became so lax the loco men protested. A bicycle was provided to collect the staff from the other end of the Cob, this being a cheaper solution in terms of first cost than a staff instrument.[1] 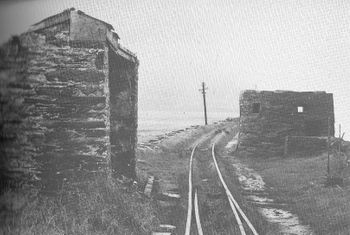 The remains of the signal box on the left and the pill box on the right in October 1954. Photograph from: Porthmadog to Blaenau, Middleton Press - www.middletonpress.co.uk

During the second world war a gun emplacement (of traditional Pill Box style) was placed on the land side, making the clearance for vehicles very tight. The Inspecting Officer of the Ministry of Transport, Col McMullen, who inspected on 21 July 1955 in preparation for the reopening for passengers observed that the pill box should be removed as no one appeared to own it. The walls soon crumbled when attacked with hand tools. The reinforced concrete roof proved a more formidable task and one large chunk of it remained near the site for some time. Demolition of the last bit including the wall above the road was carried out in the autumn when there was less traffic about..[2] 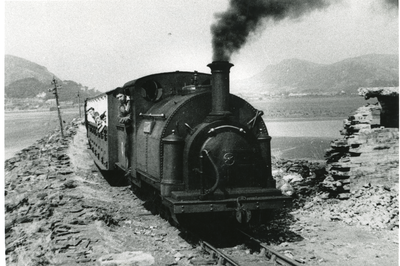 Prince passes the remains of the pill box in August 1955. Photo J.B. Snell via iBase Festiniog

The Halt was used specifically for access to the works, but also to the far end of the Traeth beach. It continued to be used occasionally up until November 1967, the end of that season.

In the book "Porthmadog to Blaenau"[3], Vic Mitchell & Keith Smith describe the chain shunting process used here in the first season : "As there was initially no run round loop available at Boston Lodge, all trains in the 1955 season were propelled empty from the halt to the yard points. They were uncoupled, attached to a chain and shunted up the main line while the locomotive ran into the yard. They were then propelled back to the halt to collect the waiting passengers."

In the early years of the FR revival the old signal box had lost its wooden front and windows but three walls and the roof survived into the 1980s as a shelter for the ground frame. It was later demolished to provide space for a longer headshunt.

The building of a new larger carriage shed at Boston Lodge required the junction points to be moved toward Porthmadog. New points were installed in January 2018 and commissioned in June 2019.[4][5] Unfortunately the reverse curve proved to be too tight for corridor carriages to traverse with the corridor connections done up, so a new, longer set of points[6] was installed over the winter of 2019/20. This new junction arrangement includes a short piece of straight track between the two points.