From Festipedia, hosted by the FR Heritage Group
(Redirected from Point Indicators)
Jump to navigation Jump to search 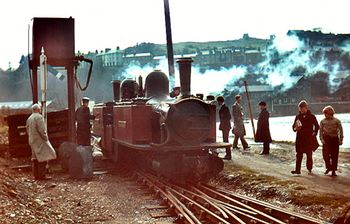 The point indicator on the left in front of the water tank, at Harbour Station, April 1961.

Point indicators were an important part of the early signalling arrangements on the FR. These were used in conjunction with Disc Signals and indicated to locomotive drivers which way points were set. They were only indicators of the position of the points - they gave no authority to proceed.

On the modern railway a new form of point indicator is used in association with train operate trailable points. 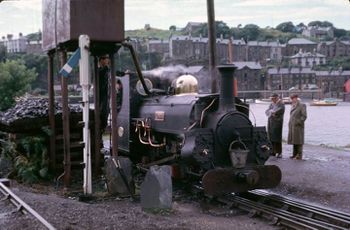 Linda beside the Harbour Station indicator in August 1962. © Peter Trinder

The most prominent design was a semaphore which was fitted in a slot on a cast iron column about 10 feet tall. If the points were set for the main line the arm was vertical and hidden inside the column's slot. If the points were set against the main line the arm took up a position roughly 45 degrees from vertical on the side of the post to indicate which way the points were set. For ordinary two way points the arms on point indicators only showed on one side of the columns.[1] The one installed at Harbour Station adjacent to the three way stub point showed three indications. These were vertical for the central road ans either side for the outside roads. This can be observed in the two photos of this indicator on this page. Additionally the second photograph the foot rungs to allow a member of staff to climb the column and place the oil lamp in position are clearly visible - although the lamp, holder and the spectacles glasses were long since gone.

Boyd (1975) Vol 2 on page 392 has diagrams that show 6 point indicators at Harbour Station (1881), 2 at Boston Lodge, 2 on the two lower crossovers with the mineral line at Minffordd and 4 at Tan y Bwlch.[2] According to Boyd there was a second type of point indicator. This was use for points not on the main line but over which locomotives were likely to pass. It was a lamp with discs on both opposite sides. Sometimes they were mounted on a post 6 feet tall. An example of one of these can be seen at Duffws on plate 15R in Boyd. Unfortunately Boyd thoroughly misunderstood the application and usage of point indicators. All point indicators (with the exception of the three-throw switch) at Portmadoc and Duffws were made of standard height Dependent (i.e. not controlled by a lever) Discs straight out of the McKenzie & Holland catalogue. At various times there were 3 semaphore point indicators at Boston Lodge, Minffordd and Tanybwlch as well as at least 3 at Tanygrisiau and single examples at Dduallt and Penrhyn. The diagram on p392 is a confused hotch-potch of many different signalling eras and should properly be regarded as a point for further research; the matter is confused further by using the 'point indicator' symbol for signals that were not point indicators! 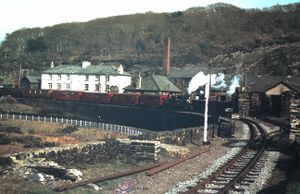 Continued use in the preservation era[edit source]

The three way indicator at Harbour Station was refurbished and repainted as a homework project by the London Area Group in South Harrow and was re-erected by the water tank in 1961. [3] It was later removed when the new access road was built for development of the flats on the old South Snowdon Wharf in the mid 1960s. It presumably was moved between August 1962 and June 1963. It was re-erected at Pen Cob to show the position of the Boston Lodge yard entry points. In this set up the indicator displayed left and right indications at an angle either side of the post rather than using a vertical position for a straight ahead indication. This point indicator is the one now on display in Spooner's bar at Harbour Station.[4] 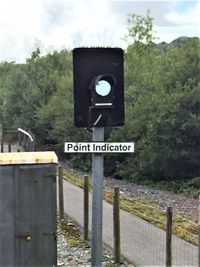 The point indicator in the up direction at Pont Croesor.

The signalling on the modern WHR (and the similar installation at Tanygrisiau) uses a new form of point indicator on the approach to stations. Located at each end of the station just before the train operated trailable points, they consist of a white light that illuminates to show that the points are fully over. If the light is extinguished the train must stop and ensure the points are correctly set before proceeding. In some locations the point indicator lights are interlocked with the level crossing indicator lights. 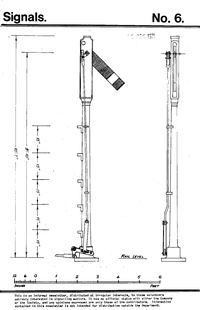 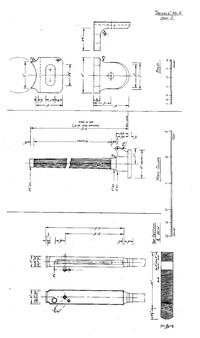 Signals No 6 dated December 1971, carried on its front page a dimensioned sketch of an old Company point indicator. This was drawn by John Wagstaff after the point indicator had been moved to Pen Cob. John and his friend and colleague David Josey, both Signal Engineers at Croydon on British Railway's Southern Region, measured the indicator in 1971 whilst it was still in-situ at the entrance to Boston Lodge.

In this issue our sketches show the “Old Company” point indicator, reproduced from S. & T. drawing SM.404 (two sheets prepared in 1971). In the old days these indicators were fitted at turn-outs from the main line. If the points were set for the main line, the arm hung vertically, concealed within the post; with the points reversed the arm emerged from the slot on the same side as the divergence. Thus, in the example illustrated, the points are set for a line to the right of the main line. At night indications given by lights, probably white for the main line and red for the turn-out. So far, we have seen no official information upon these aspects, nor do we know very much about the lamp, which sat on the top of the post, or the spectacles which were in front and behind the lamp. This type was not used in the Blaenau area, where the signalling differed considerably from that in use elsewhere on the line. As with most old company equipment, the drawings available tend to conflict with surviving evidence, and the specimens which still exist differ in detail among themselves. Although long ago there was a point indicator at Pen Cob, the one in use now was installed by the present management.

The SM series of drawings was, assuming my memory is correct, one of a series of drawings that John and I put together. John kept the ‘negatives’ and the index of the drawings. We called them ‘negatives’ at work, but actually they were positives drawn on transparent sheets which were then printed on paper. Though I was John’s executor, I found neither the negatives nor copies of these drawings when I sorted out his possessions and his many, many books. John was meticulous with records so it is likely that he gave them to Michael Seymour for the FR archives. Perhaps one day they will re-appear.

The point indicator at Pen Cob as Merddin Emrys passes on 4/6/1963.