Paul Lewin is the current General Manager of the Festiniog Railway Company.

He assumed the role of Acting GM from 22nd December 2002, later the position was confirmed.

Has clocked up some 33 years on the footplate having first volunteered at Boston Lodge, aged 15 - He didn't think to mention his age at the time! He was Working Party Organiser for the now-defunct Leicester Group in his late teens. Paul is a great fan of Hunslet 2-4-0STT Linda. He was the project Manager for the Lyd Project working closely with its founder James Evans.

Paul is also a director of the Heritage Railway Association and an adviser to the Welsh Government (BETS) on tourism as a member of the Tourism Sector Panel. 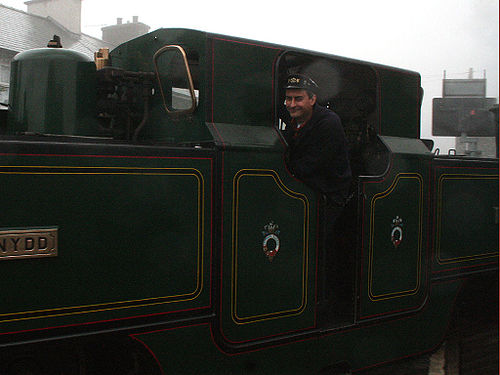 Paul Lewin grinning from ear-to-ear at the regulator of the Earl of Merioneth (on its first coal-fired passenger run, May 27th 2006)