The original bridge was constructed by the North Wales Narrow Gauge Railways in the nineteenth century. It was inspected by Jim Wood, a distinguished BR bridge engineer (and author of Bridges for Modellers), who pointed out that the vertical stiffeners are not opposite one another and therefore that the bridge has been re-set - i.e. it is second-hand; it was probably a standard-gauge bridge sold off when its line was being upgraded in the 1870s. It was formerly possible to see the rust marks from deck beams some 6ins deep which were there prior to those found when the bridge was rebuilt for the modern WHR. The bridge is reported in Boyd to have been rebuilt in 1894; this would be consistent with the beams found.

Rebuilt for the modern WHR[edit source]

The bridge was extensively rebuilt and modernised during 2002-2003 as part of Phase 3 of the Welsh Highland Railway rebuilding. The metal bridge structure was jacked up to allow work on the abutments. The northern one was significantly strengthened and rebuilt whilst the southern one was completely demolished and replaced with a new concrete structure similar in style to the one it replaced, this was then clad in local stone to replicate the old appearance.

The main girders were retained but extra pieces were welded into the end sections of the humpbacks because their strength in shear at the ends could not be trusted. They were carefully coated in a paint which should last at least 20 years. The old wrought iron crossmembers were replaced in steel and new steel waybeams added in place of the original timber baulks. As part of the work, a walkway was added to the outside of the western bridge beam; this is a mitigation measure carrying a private path, replacing a previous route crossing the bridge on the trackbed itself.

The former standard-gauge scantlings have allowed the narrow-gauge track on this bridge to be curved, which complicates the dynamic stresses, but fortunately trains are speed limited on the sharp curves north of the bridge and a potential stop at Plas y Nant halt also means a slow approach from either direction. At the other retained bowstring bridge at Pont Tros y Gol the track is straight and the speed limit correspondingly higher. 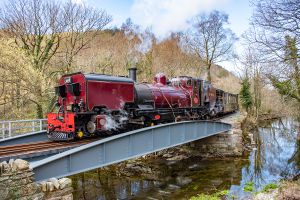 The main bridge girder structure was deemed to have reached the end of its life in 2020. For a few years prior to this there had been a restriction on the bridge banning the double heading of NGG16 locomotives across it. The new structure was fabricated by Beaver Bridges in Doncaster and sits on the existing abutments which were rebuilt when the railway reopened. The new bridge looks very similar to the old one but is built to a slightly revised design that takes into account modern engineering principles. The old bridge was dismantled over the winter of 2020/21 with the main structure being craned out on 4 March. The replacement girders were installed on 8 March. The remaining works, including reinstating the track, were completed over the following weeks, in time for the start of the 2021 season on 30 April.