130 is an NGG16 Garratt locomotive, restored for use on the Welsh Highland Railway. 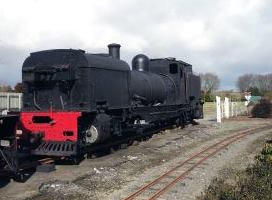 At Exmoor before going to the WHR

130 was built by Beyer Peacock for South African Railways to their 2-6-2+2-6-2T NGG16 Garratt design. 130 is from the third batch of NGG16 locomotives built by Beyer Peacock and Company of Manchester in 1951. It carries the works number 7431. It was used in South Africa on the Port Shepstone-Harding branch in Natal before being withdrawn in 1985. It was subsequently moved to Springs depot, from where it was anticipated it would become part of the collection of a museum at Port Elizabeth. This museum never materialised and instead the locomotive was sold for export to the UK.

Preservation in the UK[edit source]

Like 87, it was imported to the UK for the failed Robin Hood's Bay railway scheme before moving to Exmoor. It was purchased from Exmoor by Peter Best's Steam Powered Services Ltd.[1] 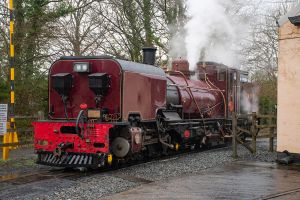 First moves under its own steam. 5 February 2021

130 arrived on the WHR in 2015. It has been restored for use on the WHR by the works at Dinas. The restoration was funded by the locomotive's owners. The rebuild included a new boiler built by Northern Steam Engineering Limited of Stockton. The boiler arrived in December 2018 and was fitted to the frames; however, in June 2019 the boiler had to be lifted out again. This was to facilitate the changing of twelve suspect material rivets. The tanks and cab have also been replaced with new (welded) ones of the same style as used on 138 and 143. It has been painted in Burrell Plum, a colour that approximates the red used by the Canadian Pacific railway. The same colour is carried by other locomotives belonging to Peter Best. By November 2019 both tanks were at Boston Lodge and had been fully painted, lined and varnished. Progress on the locomotive was moving forward; however, progress was slow as 87 took priority. On 3rd December 2019 the cab was removed from the loco and arrived at Boston Lodge for painting. It was hoped that the cab would return by the new year, however the paint team at Boston Lodge were busy painting Carriage 102 and the cab was not ready. The locomotive was expected to enter service at the start of the season at Easter 2020, however all work was stopped on the loco due to the Covid-19 crisis. At the time work stopped, the loco was very close to completion and there was approximately three months worth of work left. Work on this locomotive was one of the first projects to recommence after the restrictions began to be lifted. This was because further delay to the project risked the locomotive not being complete before 143 came out of traffic which would have left the WHR short of locomotives.[2] By December, the loco was very close to completion. The cab, tank, bunker and boiler cladding were all fitted and painted; the last major job was the pipework around the boiler. The boiler had also been given a further hydraulic test to start the 10-year ticket. [3]

On 29 January 2021, 130 was steamed for the first time on the WHR. [4] A week later on the 5th of February it made its first moves under its own steam.[5] This was followed by further fettling and test running before the locomotive entered service.

130 entered service hauling a special members train from Caernarfon to Beddgelert on 30 April 2021.