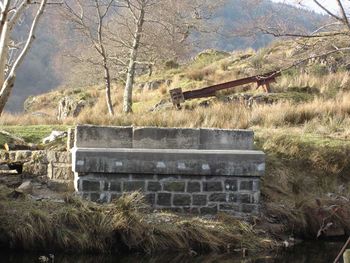 To the right of the bridge abutment is a remnant of the former steel bridge that occupied this site from 1922 to 1999. The bridge was never painted throughout its 77 year life and unfortunately corrosion rendered it unsafe and beyond economic repair. The remnant that you see here is the last and only remaining piece from three similar truss bridges which were constructed by Sir Robert McAlpine in 1922.

The new bridge that replaces the old is an accurate reconstruction of the original Douglas Fox design making use of both existing abutments and the bearings at the south end. The water under the bridge is deeper than at any other of the bridges on this railway; the river bed is nearly 6m below rail level. The bridge is very similar to those at Bryn y Felin and Pont Dylif.