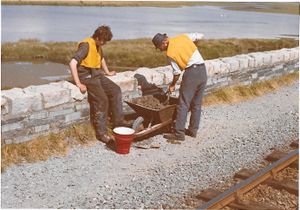 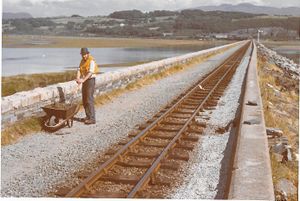 Bob Mac, as he was known, was a signal trainee at Reading with the WR S&T. In the early 1960s he was living in Farnborough, Hampshire, and was a member of the Railway Enthusiasts Club (REC). He visited the FR at Christmas 1963 with Bill Young, Tony Stapely, Brian Ruffell and David Josey. Later, when David Josey got involved with the FR Signals from late 1968, Bob joined this signal gang. By this time he was living in a boat yard at Oxford, where he was fitting out a narrow boat hull. Being Bob, the propulsion was stern wheel. Also being Bob, the boat was named 'The Jethro Tull,' after a 17c/18c Oxfordshire agriculturist, and which now resides on the River Wey and owned by a friend of Bob's.

When it was decided to have a 'signal technician' on the permanent staff of the Company, and funding was available, David Josey & John Wagstaff were pleased to recommend Bob to Allan Garraway.

He left the FR and joined the Docklands Light Railway in 1991.

Bob had an important role in instigating the FR's involvement in the rebuilding of the WHR. As well as being the FR S&T Engineer he also was a member of the WHR (1964) Ltd and helped as a volunteer with signalling their layout in Porthmadog. It was he who approached the FR's General Manager, David Pollock, in 1987 and warned him that Gwynedd County Council in partnership with the WHR 1964 Co. was likely to purchase the WHR trackbed for £1. This alerted the FR Co. to the threat of growing nearby competition and started the process of the FR bid for the trackbed and the whole story of rebuilding and operating the WHR.[1] [2]