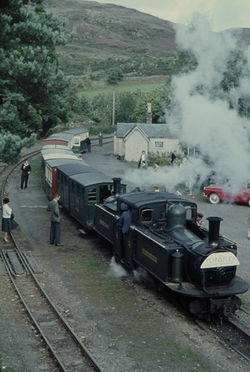 At Tan y Bwlch behind Taliesin

The Flying Flea was an unadvertised relief train introduced at short notice in 1958. There was a problem with coach firms dropping their passengers at Portmadoc and picking them up at Minffordd. There were sometimes in August 1958 as many as 130 single bookings per day from Portmadoc to Minffordd. To relieve overcrowding on the 2.30 pm train it was decided to run a relief train of four-wheelers from Portmadoc to Penrhyn. Coaches Nos. 4, 5 and 6 (Bug Boxes) were made serviceable in a few days. Most of them had strengthening ironwork added to stop their sides falling out. Originally the Flea ran with No. 1 van but it had no vacuum brake and so No. 2 van was repaired and was vacuum equipped. The Flea only ran to Penrhyn on one occasion. After hurriedly checking clearances to Tan y Bwlch it ran there on every subsequent day. The usual loco was Prince. The two trains met at Tan y Bwlch. The "Flea" left Portmadoc at 3 pm (2.45 pm in 1961) after the main 2.30 pm afternoon train and arrived at Tan y Bwlch in time for the earlier train to depart from there at 3.30pm. The train was first advertised in the 1961 public timetable. [1] This produced some correspondence with the Railway Inspectorate because the published timetable actually showed the 2.30 pm Porthmadog departure leaving Tan-y-Bwch at 3.30 pm but the Fying Flea only arriving there at 3.31 pm![2] Nor were they happy about departures from Porthmadog happening 15 minutes apart (2.30 pm and the Flying Flea at 2.45 pm) when the Penrhyn to Tan y Bwlch section time was 27 minutes.[3] This implied that two trains would be in the Penrhyn to Tan-y-Bwlch section at the same time.

The Flying Flea nick name was because the train of originally just four diminutive coaches hauled by Prince was so small.[4]

As more carriages became available in following years so both the main train and the "Flea" became heavier, and the latter went into the timetable together with a morning train for certain regular coach tours. In 1962 the timetable was recast to provide a peak season service to Tan y Bwlch with two train sets, crossing at Minffordd.[5]