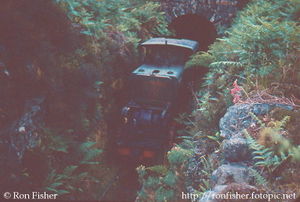 A pinch point on the old FR: Moelwyn Tunnel (then not "Old"), with its namesake exiting. Photo Ron Fisher, June 1961. 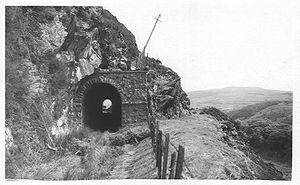 A pinch point on the present FR: Garnedd Tunnel. It hasn't changed since this photo was taken by D.J. Norton in 1960. 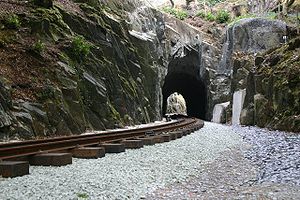 A pinch point on the WHR: the southern mouth of Goat Tunnel. Photo Simon Melhuish, 6th May 2007.

In pre-closure times the maximum loading gauge on the Festiniog Railway was dictated by the bore of the Old Moelwyn Tunnel, which measured just 8' wide and 9' 6" high. As such this was responsible, for instance, for the subsequent dramatic cutting down of Russell. Moel Tryfan was similarly - though more successfully - doctored to fit the FR. The loading gauge, of course, also dictates the maximum dimensions of any stock able to run on the line.

Since construction of the Deviation, the maximum loading gauge of the whole line is now dictated by the dimensions of Garnedd Tunnel at the eaves and by Rhiw Plas Bridge for overall height. The width of cuttings at locations such as Minffordd cemetery also affects the loading gauge lower down the line. When Linda arrived on the FR, for instance, the cab was reprofiled as a result of clearance tests at Garnedd tunnel. Moelwyn was also modified, the cab roof being lowered by some six inches by simply cutting the angle iron corner posts.

Rhiw Plas bridge was historically a greater restriction than it is now - more so than Garnedd Tunnel even, for when the bridge was rebuilt in the winter of 1959/60 it gave greater clearance than before, a move which allowed the building of the larger Centenary stock (Barns).[1]

As a result of this increased height of the stock, it subsequently proved necessary to rebuild and raise the height of the four footbridges between Tanygrisiau and Blaenau Ffestiniog.[2]

Today Rhiw Plas remains a restriction on the lower part of the line. Carriage 2060 (for the WHR) was too tall to pass under the bridge and was craned onto FR metals from the adjacent roadway, rather than being delivered via Minffordd Yard. K1 has faced similar problems.

An informative diagram of the FR Loading gauges (pre-1954 and currently) can be found near the beginning of "Porthmadog to Blaenau" by V.Mitchell & K.Smith, Middleton Press, 1995

The Welsh Highland Railway has an altogether more generous loading gauge, allowing the running of larger locomotives and stock. The maximum loading gauge on the WHR is probably mostly dictated by the dimensions of Goat Tunnel in Beddgelert. Historically the NWNG engines could not pass the loading gauge imposed by this tunnel and had initially to be confined north of Beddgelert. The original tunnel here was commenced by the PBSSR in 1905/6, but was left incomplete when the project stalled. In 1922, with the building of the Welsh Highland, it was opened out and used. In the rebuilding in 2007/2008 further opening out has had to be undertaken to accommodate the larger "envelopes" of modern day rolling stock, and safety requirements.

Technically speaking, the phrase "kinetic envelope" is more accurate than loading gauge, as this takes into consideration not just raw maximum dimensions, but the like of extra space or overhang taken by a carriage when swinging out at speed, necessitating the speed restrictions at some of the above-named restricted locations.