The Old Moelwyn Tunnel was the longer of the two tunnels on the line for most of the pre-preservation life of the FR, though neither was in use at the opening. Some 730 yards in length, this tunnel was bored through hard syenite rock with three circular shafts for ventilation. The tunnel measured just 8' wide and 9' 6" high, and as such dictated the maximum loading gauge of the line thereafter. 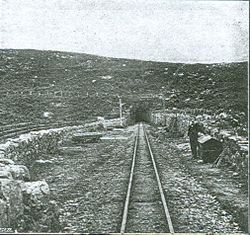 Southern portal of the Long Tunnel

Just prior to entering the southern portal of the old Moelwyn tunnel, the formation widened. Following construction of the tunnel, a passing point for traffic was placed here, presumably replacing the facilities in use in the climb over the hill before the tunnel was opened. Horses were changed over here. (See Tunnel South Halt.)

An Antipodean newspaper, quoting from the British The Engineer magazine in 1869, said that things could get "nasty" if a loaded train going uphill stalled in the tunnel for any reason. Smoke would get suffocating, particularly if the wind was blowing the wrong way, while the narrow gap between carriage and tunnel wall compounded by darkness would make it difficult for passengers and crew to escape into fresh air at the end of the tunnel. [2]

When the line closed the CEGB decided to build a pumped storage power station at Tanygrisiau. This necessitated the flooding of the FR trackbed north of the tunnel. As a result the tunnel was plugged near the northern end in order to seal the reservoir. The flooding of the line resulted in the construction of the Deviation and the New Moelwyn Tunnel on a new alignment above the level of the reservoir.

Use in the revival era[edit]

A number of trains passed through the old tunnel in the revival era before the line was closed.

The two photos above have been posted here with the kind permission of the photographer Dr Ray Wills. 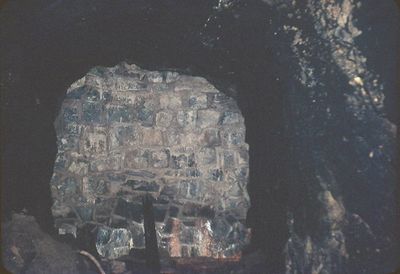 Inside the old Moelwyn Tunnel. Blocked up top end.

In an email to Kim Winter dated 10 January 2005, Ron Fisher writes about the taking of the above photo:

"As it was some 45 years ago, I cannot remember exactly how we came to be exploring the tunnel, but we must have had torches with us which suggests that we went there with that in mind rather than going in on the spur of the moment. I do remember that it was rather damp. Wet, even! However, the wearing of wellies was the norm when on London Area Group Working Parties, so it was clearly not too deep to flood our boots.

Being April, it was probably Easter when we always had a large party. How many of us ventured into the tunnel I cannot remember, but at least two, probably three or four. Which camera I was using at that time I also cannot remember. Possibly my old Ilford Sportsman. The film was Agfacolor CT18 and the flash gun was probably my old Boots Tickyflash. This was in the days of individual use once only flash bulbs, blue ones for colour film. It was all a bit hit and miss, but, on this occasion, it worked.

We often explored the closed bits of the line above T-y-B in those days, so curiosity included the old tunnel.

There was a special working up to Dduallt and the tunnel one evening after the trains had finished for the day. Purely by chance, I happened to be there, and as I never go anywhere without a camera....."

The tunnel in use in the revival era[edit]

A sight not seen for many years! This is the 'top', northern end of the original Festiniog Railway Moelwyn Tunnel. Blocked by an internal 'plug' (see above) when the Tanygrisiau lower reservoir for the pumped storage scheme was built by the C.E.G.B. in the late fifties/early sixties, the cutting was filled with rubble and the tunnel portal was mostly obscured. This has now been excavated by First Hydraulic Power so that they can inspect the plug to check on its condition.