From Festipedia, hosted by the FR Heritage Group
(Redirected from Maenofferen)
Jump to navigation Jump to search 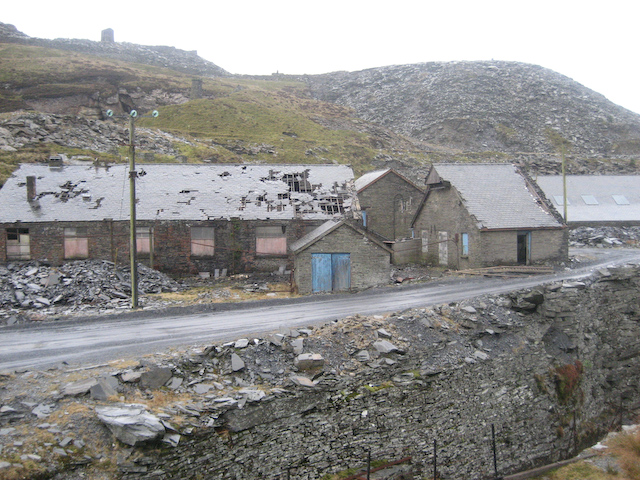 The Maenofferen Quarry (colloquially pronounced 'Maen-offeran') was one of the major slate quarries of the Blaenau Ffestiniog area.

The first recorded working of the Maenofferen site occurred around 1810, but not until J.W. Greaves acquired the rights in the 1850s did it achieve commercial success. The quarry became independent in the 1860s and continued to find success through the decades that followed. It began large-scale use of locomotive on its internal tramways from around 1900 and introduced hydro-electric power in 1918. [1]

Following the First World War, Maenofferen was the third largest slate producer in the Ffestiniog region. After the Second World War, fortunes declined and in 1975 the quarry was purchased again by the Greaves company [1].

Production ceased at Maenofferen in November 1998. 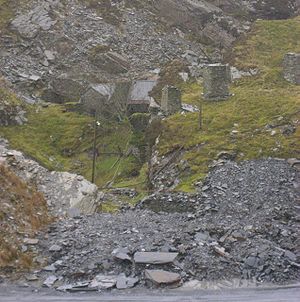 The head of the back vein incline 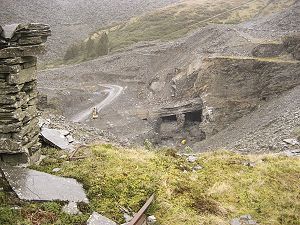 Extensive internal tramways were employed by Maenofferen. Initially it was connected to the Festiniog Railway's Duffws terminal via the Duffws incline. After the opening of the Rhiwbach Tramway in 1863, Maenofferen used the lower two inclines of the tramway to send its product to the FR, thus avoiding having to use the inclines of the rival Votty And Bowydd Quarry [1].

This arrangement continued until 1920 when a new incline was opened across Votty and Bowydd, bypassing the No. 1 incline of the Rhiwbach Tramway. The Maenofferen company acquired the Rhiwbach quarry and tramway in 1928 and use of the No. 1 incline resumed. This arrangement continued until 1962, when the Rhiwbach Tramway was closed. However Maenofferen continued to operate the No. 2 incline until after 1975: it was the last self-acting incline used in the Welsh slate industry [1].

During the period from 7 October 1946 to November 1963, the track between Duffws and Blaenau Ffestiniog LNWR Yard was leased and operated by the Maenofferen and Votty and Bowydd Slate Quarries for slate and other freight traffic. These quarries used Ruston & Hornsby 4wDM locomotives and at least one was kept under the road bridge near the LNWR yard for working this traffic.

The company also had space in the yard at Minffordd where this picture of Kidbrooke, was taken in the mid sixties - see this external site (S.A Leleux)