The goods shed at Tan y Bwlch was constructed in 1883 at a cost of £85 10s 11d.[1] Boyd calls it a warehouse.[2] It was originally intended to be on the goods loop rather than have its own separate siding. 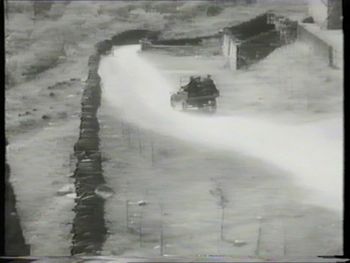 Leaving down the station drive. This was (until 2015) the only known photograph of the coal compound, the 'roofless building' to the right of the drive. This was served from above by two drops beside the goods shed, upper right. The FR's end-door coal wagons were turned for unloading on a pair of wagon turntables.

It had coal drops into a bay in the station approach road which accounts for the steep drop below the modern cafe terrace. The coal drops were served by a siding with two wagon turntables on it. Another siding led into the goods shed itself. See the main Festipedia article about Tan y Bwlch for a diagram with the layout. For a view of the coal drops in the 1930s see the still to the right from the film The Phantom Light (available on Youtube) at 7 minutes 16 seconds. Alternatively see Festipedia page The Phantom Light still shot 11.

There was a crane outside the goods shed rated at 1.5 tonnes (30 cwt). For two good photographs including the goods shed in the background, see Branch Lines Around Portmadoc 1923 - 1946, plates 99 & 100.[3] The crane was still in situ in the early post revival photographs of the goods shed. The crane succumbed to age and the attentions of inquisitive visitors during the 1950's. The goods shed siding ran through the shed close to the North wall and originally passed through a door in the back of the shed and out beyond it. There was no raised platform in the shed, just a level floor with rough stone slabs. At some point before the railway's closure, the siding was shortened and the doorway filled with a drystone wall. During the closure period and early revival years Will Jones had a work bench positioned just inside the door and hung his hand tools on the wall above it. (Gray 2015)

Tan y Bwlch was once the centre for traffic to the Oakley estate and Plas House with considerable quantities of timber, coal and merchandise being handled. Special trains of goods started at Tany Bwlch carrying timber to the Oakley Quarry. There were also occasional gravity trains of timber to Minffordd.[4] In those days Tan y Bwlch had something of the "private" station feel with the interests of the estate, Plas House and the estate's tenant farmers much to the fore.

Boyd recalls that during the closure period there was a notice by the bay in the station access road that read "This Warehouse closes at 6 pm". 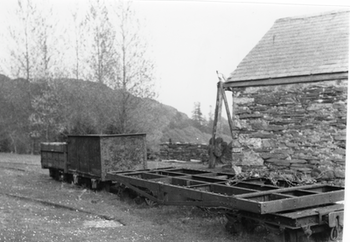 During the years after the FR reopened to Tan y Bwlch, the goods shed was used for storage for items such as PW spares, tools and fencing materials. At this time Bessie Jones ran a cafe from her front room of the station house, which was her own little enterprise rather than the Company's. Competition arrived when Van 5 (old carriage or van 12) was converted to a buffet car in 1957 and arrived with the first post revival trains to Tan y Bwlch in 1958. According to the Festipedia article, talking of post revival times, "Will Jones still found time to keep a smallholding and deliver coal from the Tan y Bwlch wharf to Rhyd and Llanfrothen". It was presumably delivered to Tan y Bwlch by lorry after July 1946 when the FR closed to freight?

In 1965 the station facilities were improved by providing a sales kiosk in the car park which because of its appearance soon became nick named the "Bunny Hutch". It sold souvenirs, ice creams etc. and could be considered the forerunner of the café. It was moved to Dduallt in 1968. 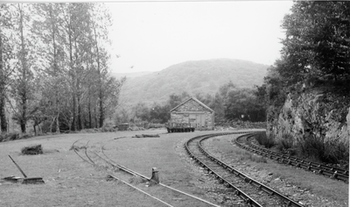 In the 1960s a set of 13 photographs of the goods shed and the coal drops were taken by Howard V. Lobb CBE, FRIBA when his architecture firm prepared plans for the conversion of the goods shed into a café. These plans had resided on top of Allan Garraway's filing cabinet in Harbour Station for many years and passed through Bryan Chicken's possession before being passed on to Adrian Gray who published eight of them in Heritage Group Journal No 122 in Summer 2015. These are the best record of the goods shed and the coal drops before the shed was converted into a café. (Gray, 2015) 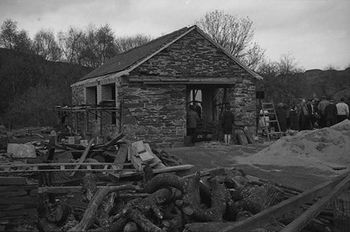 The Goods Shed undergoing conversion to the Café in April 1968. Photo. John Ryan

The FR Magazine in Spring 1968 reported that at Tan y Bwlch work had started on the first stage of converting the goods shed to a station building. If nothing else it would provide a dry waiting room on wet days.[5] Perhaps one can read a clue into this timing as the facing page has an article about the retirement and departure of Will and Bessie Jones. At this time a lot of changes were about to happen at Tan y Bwlch connected to the reopening to Dduallt - the most notable being the slewing of the loop and construction of the island platform.

The conversion of the goods shed into a café involved the insertion of windows into the front and back walls after constructing lintels and the building of an extension at the back to provide a kitchen and stores. Toilets were also added in a wooden structure which was later replaced with a more substantial extension to the café building. These toilets replaced the original gents urinal which was behind the old water tower stone plinth. Today, (2014) the cafe has seating for about 45 inside and the marquee style covered paved area alongside and the picnic tables provide space for many more to eat their meals whether purchased or brought by the public. The menu is extensive. The café is usually manned during the season of daily trains. 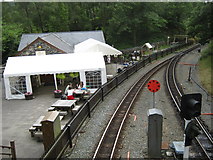 Photo: Copyright Michael Westley, The café with an additional marquee for a function

There is no booking office or stationmaster at Tan y Bwlch so the cafe can sell tickets for simple journeys on the FR. Its staff also answer the public's questions about the railway, timetable etc. Tickets purchased here are printed by the café's till and so are of the flimsy paper variety.

The café also caters for functions of the FR Society and Company and private bookings such as parties and weddings. The children's playground behind the café makes it very child friendly. It is a common destination for local couples with small children.

The Service of Thanksgiving on Sunday 26th September 2004 on the occasion of the celebration of 50 years of the FR revival. Photo. John Dobson.