Croesor Junction lies just 20 chains (¼ mile) to the north of Ynysfor, and 50 chains (⅝ mile) south of Ynys Ferlas. It is the point at which the WHR historically joined the route of the Croesor Tramway, following it southwards from here to Porthmadog.

The place was — and is — bleak and featureless, being on the original flood plain of the Glaslyn, and had no road access. Despite what might appear to be a grand name, it was simply a junction (later with a loop). Few pictures exist of it in WHR times; given that there was no halt here, and no access, this should not be surprising. One such picture, though, taken in 1925, appears in Branch Lines around Portmadoc, 1923-46 (see references).

John Stretton, in The WHR Volume 2, states "Due to the elaborate loop and pointwork at the junction, a station was not provided there." A more logical reason for the lack of any station was the total lack of need. The only access was by way of a footpath from Erw Fawr and along the track of the Tramway from Pont Garreg-Hylldrem, but even so, anyone at the Junction would surely only be there on railway business for nearby farms were served by the adjacent halts, as named above.

A simple plan of the Croesor Tramway at this point, before any junction was built.

Prior to the establishment of the Portmadoc, Beddgelert and South Snowdon Railway, this location had no significance at all - it was merely a point on the Croesor Tramway, laid with light 20lb rail, suitable for horse-haulage. Following the purchase of the Tramway in 1901, most of the section of tramway south from Croesor Junction (i.e. to within a mile of the GWR crossing) was relaid in heavier 41lb flat-bottom rail (footnote 1), the intention being to then use this section of Tramway as the main line (eventually joining up with the NWNGR at Rhyd Ddu) and to build a junction at this point for the line to the Croesor quarries. By 1909, however, the North Wales Power and Traction Co. Ltd, which was funding the PBSSR, was in financial difficulties and all work stopped. The construction company (Bruce Peebles & Co) went into voluntary liquidation.

Spring’s report of 1921 (commissioned by the FR) noted that “The present tonnage of slates sent from Croesor (Park) Quarries is from 80 to 100 tons per month. This all proceeds to the Cambrian Railway sidings about 1 mile from Portmadoc Station and is at present horse drawn. The output from these quarries is said to be increasing and it is said that the pre-war monthly output was 300 tons.”

Footnote (1) The line from Croesor Junction to (and one rail joint beyond) the A4085 road crossing at Garreg-hylldrem ('Ugly Mug Rock') was in 1948 laid in the same rail (presumably 41lb/yd or 20kg/m) as that from Croesor Junction to Portmadoc, but whether it had been laid in 1904 or 1922 is a matter for discussion. The present writer had imagined it was war surplus rail used by the WHR.

A simple plan of the first junction.

Following the subsequent purchase of the Tramway by the newly established WHR, from 1922 to 1924 a single set of points was put in at this point [citation needed], whereby the upper quarry portion of the Croesor Tramway could join the WHR mainline which was being extended towards Beddgelert — it curved away north-westwards on a low embankment at a tightish curve of 4 chains (80m) radius, slackening slightly to 6 chains (120m).

The OS Six-Inch map of c. 1916 shows the point and a railway extending west and north-west to the margin of Afon Dylif.

In July 1923 Stephens purchased a Simplex four-wheeled petrol loco to be used for Croesor slate traffic (this was much later to be named Mary Ann). The Simplex underwent trials on the whole of the WHR, including the Bryngwyn Branch, “acquitting itself well”, according to The Railway Gazette, which attended some of the trials, and which also said that the loco “may be useful for miscellaneous duties or special trips, or for light goods traffic”.

Colonel Mount’s Ministry of Transport report of May, 1923 reported that the point lever at Croesor Junction was not locked and that there was no trap-point on the tramway. It is not known whether a trap was built, for it was already becoming clear to the WHR that the southern section from Porthmadog was too long, and consequently it was proposed to have a passing loop at this junction. In March 1924 the Portreuddyn loop materials were therefore moved to Croesor Junction so that a loop could be built there.

A simple plan of the unacceptable layout — the loop lies to the south of the junction points.

As first built (to a design of 7th April, 1924) the layout permitted a straight run through for the WHR. The remaining quarry tramway fed into the WHR mainline from the north-east, as before (with the loop lying a little further south). The junction points (and a trap on the tramway) were operated by hand levers, padlocked by a key on the Staff. This was an unattended location and a cabin (a former FR quarrymen’s carriage) was provided, in which was kept the Staff box, tickets and a telephone.

South of the junction was the loop — the points being 142 yards (130m) apart — and it was operated by weighted points set for left-hand running. (Note that this section describes the loop as 142 yards long and the next section, below, describes it as 140ft. This writer was there in 1948 on his bicycle and from memory thinks 140ft is more likely. He would welcome advice.)

This design, however, was not accepted by Col. Mount on a subsequent visit (presumably on grounds of insufficient protection) and, following discussion with Colonel Stephens, it was decided that the quarry tramway should feed into the loop, rather than into the WHR mainline.

(Some sources seem to imply that this first design was simply that, namely a design, but both Boyd and Johnson make it reasonably clear that the actual layout as built was inspected, rather than just the plans.)

The loop layout is altered[edit]

A simple layout plan of the junction from 1924 — the quarry tramway is slewed to feed into the loop.

The layout was therefore slightly altered and built to a new design in 1924, whereby the junction itself was built into the loop.

The WHR formed still the “main line”, curving away to the north-west, but the quarry tramway entry alignment was slewed a little south-east to run into the top end of the 140' (43m) loop, which thereafter rejoined the main line. On the quarry tramway line there was a trap point on weighted lever. This new design had the additional benefit that the points could be secured by the Portmadoc New - Croesor Junction staff, rather than the Croesor Junction - Beddgelert staff (as was previously the situation), a move which would save on a lot of light engine use.

Boyd states “Initially the Croesor trip was the FR’s responsibility, and much of the work was undertaken by the Bottom Shunter. FR wagons were used. At first the run to Croesor was made daily, then reduced to 3 times a week. Wagons were left (by horse) at both Croesor Junction and at the Llanfrothen road crossing. At times when the bottom shunter was too busy, a special working was made from Boston Lodge, this usually being either by the Simplex or a small steam loco.” From distant memory, there may have been a siding on the north-east side of the Llanfrothen road crossing into which waggons could be hand shunted, but it must have been interesting to take the loco onto the original light (20-30lb/yd.) Croesor trackwork. There were further shunting arrangements at the foot of the Parc and lower Croesor inclines, 400 yards further on, but one cannot credit a steam locomotive being taken there - a motor loco, possibly; more likely a horse.

Croesor Junction is not shown on most timetables of the period, as these mostly only showed public workings. However, a timetable of 1923 shows two almost daily workings during winter months, and the winter timetable of 1927 (when there were no normal trains) shows a special Friday working from Porthmadog to Croesor Junction, and back (although several cancellations are recorded due to “tractor failure”). The single journey took 20 minutes. Boyd also supposes that some passengers carried on these runs were probably dropped off at unofficial stops, given that no-one would have cause to alight at the Junction itself.

Presumably slate was carried from here both to the harbour at Porthmadog and to Beddgelert Siding. In addition to the Simplex, on occasions light England Engines hauled slate wagons from the Junction, and it has been recorded that some engines ran north of here even to the foot of the Park Incline (despite these being only 20lb rails).

Mount also suggested that winter trains, on seeing wagons at the Junction, should attach them to the rear of the train, designating them mixed trains. Details of how much slate actually was carried from the junction are scarce.

Traffic on the Croesor Tramway largely ceased around 1930 and, following the closure of the WHR in 1937, much of the WHR line was dismantled in 1942. However, the section of line from Croesor Junction southwards was not removed as it was hoped that the quarry would re-open after the war. This did not happen and most of this remaining rail was subsequently lifted between August 1948 and August 1949 by Will Scrap. Part of the Croesor Tramway above the village remained well into the 1950s or even 1960s, when it was stolen.

Today the railway curves past this point on a newly constructed, almost parallel, embankment of a wider radius (200m). Both old and new alignments are seen clearly in this aerial photo, taken by Peter Johnson in 2007. 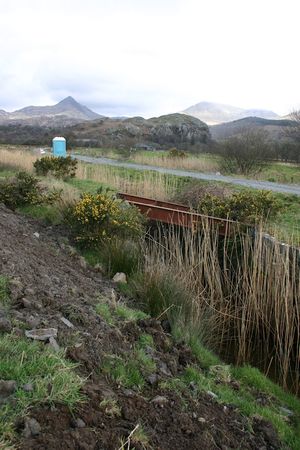 A ground level shot. This would have been taken roughly on a line with the "2008 -" in the drawing alongside