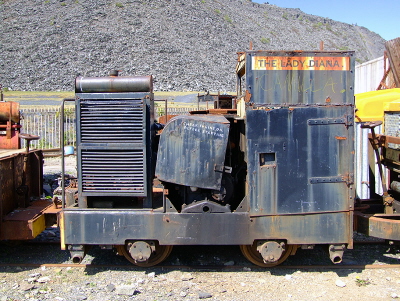 Lady Diana in Glan-y-pwll yard. The writing on cover to right of the radiator reads: 'Check engine oil before starting' 2007

It was obtained by the FR Society's Staffordshire Group about October 1972 from the Upper Tame Drainage Authority, Minworth, Warwickshire. Refurbished for use on the Deviation it arrived on the railway in July 1974. It carried the Deviationists' number JGF2, referring to the "Jolly Good Fun" that is had by all who work on the FR, and received the name "Diana" after the wife of Adrian Shooter, who was one of the Deviationists. The name was changed to "The Lady Diana" to commemorate the wedding of Prince Charles to Lady Diana Spencer in 1981.

It achieved fame as the only locomotive on the isolated Tanygrisiau to Glan-y-Pwll section during the later stages of the Deviation construction. 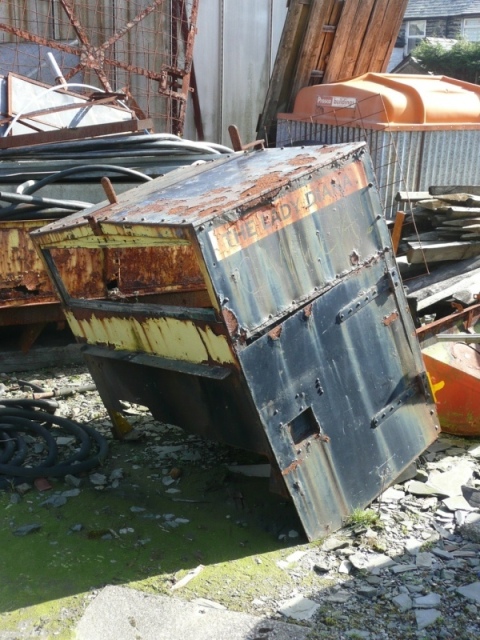 The cab of Lady Diana, as seen in Glanypwll Yard, March 2009, with traces of "Camilla" just visible

The locomotive rolling chassis was noted in Glan-y-Pwll workshop in September 2008, recently repainted. It is due to emerge with the power unit from Sandra, currently used in The Colonel, together with Sandra's gearbox and a new body. The former cab, complete with "Camilla" pseudonym, was outside.

By December 2009 the rebuilt locomotive was substantially complete, equipped with an overall canopy and black and yellow dazzle stripes on each end. It is named Andy, in memory of former FR employee Andy Putnam (rather than 'Putty' as was initially rumored). It is likely to be used on civil engineering and S&T trains.