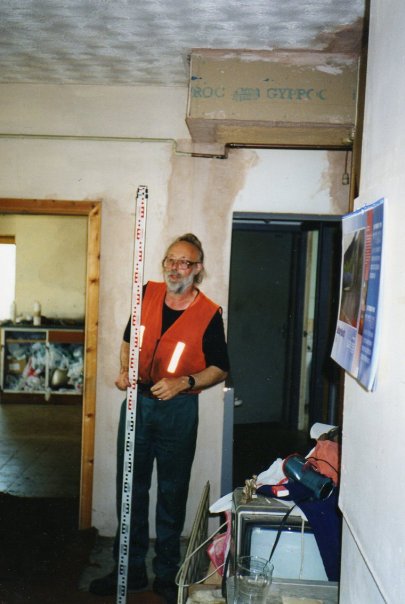 Mr. P teaches how to use a Level and staff inside the old Glanypwll Hostel

Andy, Putty, Put or just Mr P, everyone had a nickname for him. Andy died suddenly at home on the evening of Wednesday 4 March 2009, aged 64, having been at work earlier that day. He spent the morning preparing for volunteers who were coming for the weekend and one of his last jobs was a bit of shunting with his favourite engine, Moel Hebog. He even washed his van as he was thinking about buying a new vehicle for his retirement.

Andy was a Bristolian who never lost his accent. Few people realised that he was a time-served steam fitter. After training at Swindon Locomotive Works, he transferred to Bristol Bath Road shed where he fought many a battle with the unreliable North British diesel-hydraulics, ‘Westerns’ and D9500s. He moved to Sparrows, the crane hire company, a well-paid job which he clearly enjoyed despite the irregular hours and poor working conditions. Later he worked on lorries and plant for Cadbury Schweppes and the Department of the Environment.

He was a volunteer on the FR from the 1960s, making the journey to North Wales by scooter, motorcycle or bubble car. The FRS Bristol Area Group newsletter No. 2 of January 1964 records that at "the Group Treasure Hunt held in June Mr Putnam and his team who manned the minibus were winners".

When he joined the permanent staff in 1975 he did all sorts of jobs, making use of his huge range of skills, including driving and firing, welding and fabrication, work on locomotives, rolling stock, vehicles and plant, and notably playing a major role on the Deviation, the driving of Moelwyn Tunnel, and the extension to Blaenau when he became Civil Engineering Manager.

He was never keen on spending money, either personally or in his job. He was seldom given a budget, yet managed to create from that wonderful material called 'scratch' all kinds of ingenious constructions. Noteworthy were the mobile mixer wagon for the concrete used to line the New Moelwyn Tunnel (see Readymix Wagon), the rebuilding of the Cei Mawr culvert, complete with home-made funicular, the renovation of Tan y Bwlch road bridge, the weed-killing train, the culverts under Tan y Bwlch station, and lots of other jobs at the Tanygrisiau and Blaenau end of the line, where he knew every inch of the route, all the drains, ducts, cables and electricity meters. The application of the ‘shotcrete’ lining in the New Moelwyn Tunnel was one of his toughest jobs. It seemed to drag on for ages, with repeated gauge trials resulting in more rock having to be removed and the shotcreting reapplied. It was a logistical nightmare too, getting the shotcrete to the site without it going off and without the mixer wagon breaking down. At the time, Manpower Services Commission labour, drafted from local labour exchanges, was being used during a recession, and exasperation at working with these people led to his opinion that ‘one volunteer is worth ten MSCs’.

Andrew Elms has summed him up as the Railway's closest equivalent to Fred Dibnah. He once owned a steam roller, was a great enthusiast of canal boating and had a great deal of respect for the engineers of the Industrial Revolution. When parties of Cambridge engineering students visited the railway Andy used to take them on educational trips to places such as Pont Cysyllte Aqueduct, the Conwy Tubular Bridge, Ellesmere Port Boat Museum and the Centre for Alternative Technology. He also had a keen interest in long-distance yacht racing and was a great admirer of Helen MacArthur's exploits.

He was very much his own man. He did not like compromises and he had clear ideas about the right and wrong way to do things. It was the same with people. He spoke his mind when he thought he had to and this may have upset some people, including some previous General Managers, but if you were his friend it would be for ever. He could always be relied on to get you out of a hole, or come up with a simple answer to a difficult technical problem.

In recent years his health had not been good, but he had learned to live with it, and was in good spirits. In fact, on the day before his death, he had been to the hospital in Bangor for a check-up and was feeling fine, enjoying his customary cheeseburger at Ogwen Valley on the way. He was looking forward to travelling the country after retirement and was planning a trip to see, for the first time, engineering landmarks such as the Forth Bridge and the Falkirk Wheel. He also hoped to complete the long term renovation of his house, which he had bought for only £250 in the 1970s.

It seems easy to say this, but he truly does justify being called a unique character. The loss of his experience and knowledge will be felt throughout the Railway. Our sincere sympathy goes to his sons Christopher and Richard, and all his relatives, friends and colleagues.

Andy is a Simplex locomotive named in Andy Putnam's memory. In a fitting tribute to him, it has been constructed from parts taken from three Simplex locomotives, Sandra, The Lady Diana and The Colonel, of which the latter will be restored and the others have been effectively scrapped.