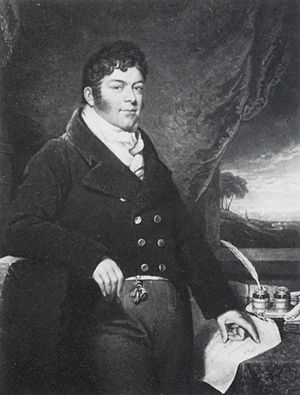 William Alexander Madocks MP (June 17th 1773 - September 1828) is described by his biographer, Elisabeth Beazley (Madocks and the Wonder of Wales) as "Improver, 'Chaotic', Architectural & Regional Planner, Reformer and Romantic". William Alexander (WAM) was the third surviving son of John Madocks, the pre-eminent English King's Counsel of the latter half of the 18th century. Though his early schooling at Charterhouse was apparently cut short, it did not prevent his progressing to Christ Church College, Oxford to read for a career in the law, following his father.

The Madocks family had connections with the Wrexham area and, as a young man, WAM frequently stayed with the Wynn's of Wynnstay. Following the death of Madocks senior WAM inherited a modest fortune, the largest part of which was in trust, and used some of it to buy a modest estate Dolmelynllyn, in the region of Dolgelly. It was from here that he visited Snowdonia, journeying around the edge of the Traeth Mawr and through Aberglaslyn.

Though he practised as a lawyer WAM's heart was not really in his work. He had become greatly interested in architecture and planning, though he had no formal qualifications, and actively sought an estate or area of land on which he could exercise his ideas about improvements. In due course he found suitable ground in several parcels of land at and around Penmorfa on the western shore of the Traeth Mawr and these were duly acquired.

Madocks planned to increase the area of land available for improvement by enclosing a part of the Traeth to exclude the tidal waters of the Glaslyn estuary. Knowing that he had the enthusiasm, but not the necessary knowledge, he engaged James Creassy, a man with considerable experience of ditching and drainage work on the Fens of Lincolnshire and Cambridgeshire, to supervise the construction of an bank, primarily of earth and sand, by which an area of land which had previously been subject to the tides was enclosed. The project was completed in 1800, to be subsequently known as the Creassy Embankment.

WAM had already begun to develop his 'model town', soon to be recognised as Tremadoc (now Tremadog).

By the early 19th century WAM had become involved in plans to develop Porth Dinllaen as 'the' port for traffic to Ireland, recently taken under English rule by the Act of Union. WAM planned for Tremadoc to become an important staging post on this route but, first, the road system in the area had to be greatly improved, preferably including a means of crossing directly across the mouth of the Traeth Bach. So was born the idea of joining Penrhyn Isaf in the east and Ynys Tywyn in the west by the mile long embankment that would become known as The Cob.

In March 1813, he resigned from the board of Hope Assurance, though what his position here was is unknown.[1]

It was about this time he was under financial pressures.[2]

From World Wiki - required editing / links into above :

He was a landowner and Member of Parliament for the town of Boston in Lincolnshire, from 1802 to 1820. He is best known, however, for his activities as an agricultural improver in north Wales, especially around the towns of Portmadoc and Tremadoc, both of which he founded.

Madocks' family originally came from Denbighshire although Madocks himself was brought up in London. As the youngest son he was not wealthy, but he had great vision. His ambition was to open up this part of Wales and raise its prosperity by improving road and later rail links and by introducing manufacture. The Act of Union with Ireland of 1800 meant through traffic was now likely. He promoted the building of turnpike roads; and to avoid the dangerous crossing of the Traeth Mawr (the estuary of River Glaslyn) or the long detour via Aberglaslyn bridge, he devised an ambitious scheme to build a great embankment across the Glaslyn estuary. This was to become part of a rail link across mid-Wales to Porth Dinllaen (now owned by the National Trust for Places of Historic Interest or Natural Beauty) on the Lleyn Peninsula which he hoped would become the main port for Dublin from London and the south of England. At that time the Menai Strait and the River Conwy were not bridged, but later his rivals succeeded in promoting the North Wales coast route and Holyhead (Caergybi) became the principal port for Ireland.

In the autumn of 1811 the embankment was finished. It had taken longer and cost more than anticipated, and Madocks’ creditors were pressing for payment. Now, an end to the financial worries seemed assured, with a toll from foot passengers and carriages, and the income from the reclaimed land. A four day feast and Eisteddfod was held to celebrate the Cob's completion.

Then in February 1812 high tides and a storm breached it. Madocks' agent and supporters held the creditors at bay, drummed up men and money from all around the county and finally repaired the breach and strengthened the whole embankment. By 1814 it was open again. But Madocks' finances were in ruins and all his properties were mortgaged. In 1821, he obtained an Act of Parliament for a harbour at Ynys y Tywyn, to be renamed Port Madoc. By 1824, he was surveying the possible train routes from Porthmadog to the new slate quarries at Blaenau Ffestiniog. Within a generation, the harbour was busy, with slates from Blaenau Ffestiniog reaching the harbour via the Cob, carried by the Festiniog Railway. This commerce fuelled the growth of Porthmadog.

In 1826 Madocks and his family travelled to Italy for a holiday. Madocks wrote home frequently, sending instructions to John Williams for the preparation of their new house Morfa Lodge, (now Gelli Fair) above Porthmadog, for their return. But on the way home in 1828 Madocks died suddenly in Paris. He was buried on 17th September in the Père Lachaise cemetery, Paris. His daughter Eliza Anne (Maria) Ermine was only six, so his estate was held in trust until she came of age. His wife returned to her childhood home near Brecon leaving the estate to be split by those who had helped finance Madocks’ ventures. The memorial to this remarkable man is the little town of Tremadog, still near-perfect in its design and setting.