Traeth Mawr (English: Big Sand) is in general terms the name of the former Afon Glaslyn estuary on the inland side of the Cob. It was drained by that embankment and is now mostly farmland. The Afon Dwyryd estuary is known as Traeth Bach.

There is now an occupation bridge on this site.

This spot was sometimes known as Portreuddyn, after the nearby Portreuddyn Castle, though the original Portreuddyn loop of the Croesor Tramway was slightly further north-east. See O.S. map. 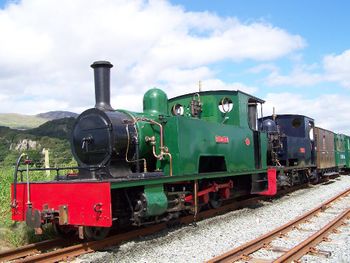 After the line north from the WHR(P) was rebuilt, public trains started to run to here from Friday 23rd March 2007.

The last public service to terminate at Traeth Mawr ran on the 28th October 2007. The loop was removed after the close of the 2007 season to make way for the bridge construction. After this date Welsh Highland Railway (Porthmadog) trains ran in "push-pull mode" to a point just south of Farmyard Farm Crossing, until November 2nd 2008. 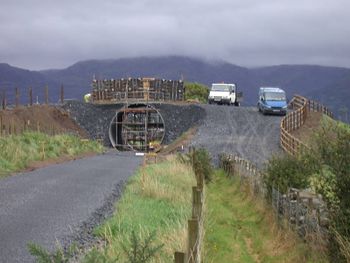 Contractors for the rebuilding work on the Pont Croesor to Traeth Mawr section started on site in April 2008. Two new "tunnels", or more accurately, overbridges, have been created along this stretch in mitigation for two local landowners. One of these bridges is at Traeth Mawr; the other is at Portreuddyn. They were built from Armco cylindrical corrugated steel sections covered with earth and are sometimes called the "Teletubby" bridges. Previously these would have been accommodation crossings.

Track laying by volunteers started on this section in July 2008 and in early December was linked to the track laid from the south by WHR(P).