Before joining the FR staff Alan Heywood gained his B.A. (Hons.) at the University College of Swansea, in history, political theory and government. He originally hails from Lancashire. He spent six years teaching - mainly history and geography to 'O' level so, the move in 1969 to a railway traffic department was not such a great jump as might be supposed.

Alan's first visit to the Festiniog Railway was in July 1955 with a party from Bury Grammar School and when most returned on their day trip, Alan and a group of about eight stayed on for a week volunteering. They stayed camping in the sand pit field opposite Boston Lodge Halt. Much of the stay was spent working at Boston Lodge and running errands.[1] Until joining the staff he was a very regular volunteer and achieved the position of Head Guard. He has written several articles for Festiniog Railway Magazine on subjects such as operating practice, developments at Harbour Station,[2] push pull operating, etc.

He became the FR's Traffic & Commercial manager. Traffic, operating, sales, buffets, and the BR ticket agency came within his remit. He claimed not to be a really dedicated enthusiast and that he tended to see the FR from the public's point of view which helped when selling to them. It led to modernistic but practical notions such as the 24-hour clock and yellow bands over first class compartments.[3]

After joining the FR staff Alan had a model railway in N gauge based on continental practice. When guiding parties on the continent for Ffestiniog Travel he had plenty of opportunities to study the real thing. He had formed the highly successful Ffestiniog Travel operation in 1967, and led its growth into a substantial overseas tour operator.

Alan Heywood served the railway under every General Manager and Chief Executive from 1955 to the beginning of 1996, when, probably to his own surprise he was asked to succeed Gordon Rushton in the post. In introducing himself to Ffestiniog Railway Magazine readers in 1996 in his new post as General Manager he attributed his qualifications to what he had learnt from previous General Managers and Chief Executives , especially Allan Garraway as regards train operating, Bill Broadbent on job grading, Dick Wollan and David Pollock regarding financial control and Gordon Rushton in relation to motivating volunteers. He left the General Manager post on 26th December 2000.[4][5] 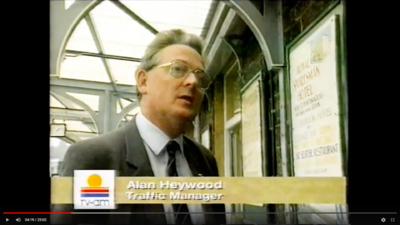