Avonside Engine Company, Bristol, was a manufacturer of railway locomotives. 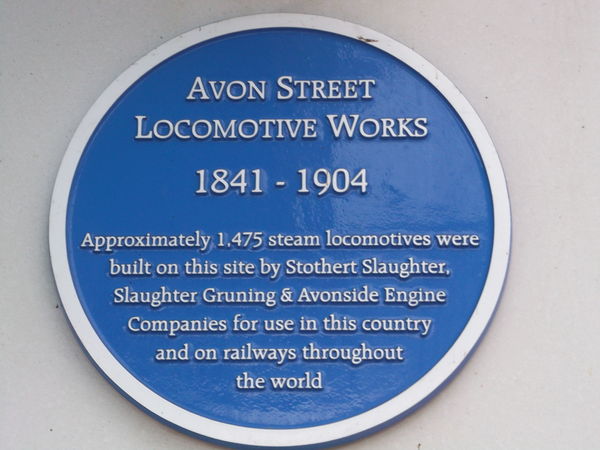 On 11th October 1862 the FR Co. received an enquiry from Slaughter, Grunig & Co., Bristol (which later became Avonside Engineering Co.) in response to their advertisement of 2nd October for quotations to build the first steam locomotives for the FR. The advertisement was as follows:-

"To Locomotive Engine Manufacturers.-Notice for Tenders.- Persons willing to TENDER for CONSTRUCTION of LOCOMOTIVES for a NARROW GAUGE MINERAL LINE, called the "Festiniog Railway," may inspect the drawings and specification, and obtain all necessary information from Mr. C. E. Sponer: or may be furnished with tracing copy, plans and specification. Etc., etc." (Jones & Dennis 2018, p 495.)

It appears they did not tender. This was the tendering process that lead to the four first FR locomotives being built by George England.

With the demise of the Fairlie Engine and Steam Carriage Company which was a joint effort by Robert Fairlie and George England's family, they had to turn to another manufacturer. Fairlie had set up a holding firm (Fairlie & Engine Rolling Stock Co.) which licensed Avonside Engineering Co Ltd. as makers of Double Fairlies, therefore when the FR Board on 18th February 1871 agreed to order a new double engine they turned to Avonside. (Jones & Dennis, 2018, p 218) Avonside had built about 21 double Fairlie's by the time James Spooner was built.

James Spooner was equipped with Widmark's draincock valves. H.D. Widmark was the head draughtsman at Avonside. (Jones and Dennis, 2018, p 220). All the FR Fairlies except for Little Wonder had these valves from 1872 until the 1930s when mechanically operated valves were substituted.

A collection of parts from Livingston Thompson were sent to Avonside in October 1928. These were the wheels, tyres, axles, axleboxes, big ends brasses, little end brasses, and side rods. Avonside were only sent three crossheads because the fourth had been purloined for James Spooner! Then Avonside were asked to make a new foundation ring for Livingstone Thompson after Glaslyn Foundry found the task too difficult. Livingstone Thompson's boiler was finally sent to them on 19th March 1927. The boiler arrived back in Blaenau Ffestiniog on 30th October 1927 and was taken straight to Boston Lodge. (Jones and Dennis, 2018, p 408).

The last information on James Spooner's boiler repairs is that the strap plates and boiler plates were sent to Avonside on 24th December 1927. (Jones and Dennis, 2018, p 408.) This repair was never completed and the loco was dismantled.

During 1933 the FR's W H Austen pressed on with his plans for Palmerston. The boiler barrel needed patching and so by April the plates and but straps had been sent to Avonside.

In November 1933 the FR Board minutes record 'conferences with Manager and Engineer about putting Merddin Emrys double engine' in good condition for the next season. Estimates were 'now being obtained from Avonside Engineering Co. and the Quarry Engineering Works at Port Dinorwic'. In late December Austen gave instruction for Merddin Emrys's boiler to be prepared in readiness for sending away to Avonside and by 16th January 1934 the boiler was at Blaenau ready for collection. (Jones and Dennis, 2018, p 431.) On 3rd May 1934 Avonside sent back Merddin Emrys's boiler which had been repaired with two new copper fireboxes and new steel tubes.(Jones and Dennis, 2018, p 436).

In each case the boilers were sent to Bristol for the work to be carried out. This work will have been done at the company's works at Filwood Road, Fishponds, Bristol where the business moved in 1905. The works in Fishponds was connected by rail to the Midland line from Bristol to Gloucester. Perhaps this explains why they were despatched via Blaenau and the LMS.

Avonside did repair to other narrow gauge locomotives as well as new builds. For example, in 1907 they made a new boiler for Lynton & Barnstaple Locomotive Lyn to replace the original one made by Baldwin in 1898! Then in December 1910 they carried out extensive repairs to the boiler of Taw. (Brown et al 1964)

In addition to steam locomotives internal combustion locomotives were built from 1914. The output of internal combustion locomotives had not been of any great magnitude but the company had gained a well-earned reputation for quality of design and high standards of workmanship. [1] The Fishponds works was sold in 1935 after the company went into liquidation in November 1934. The good will, drawings and patterns were sold to Hunslet Engine Company who still mention Avonside on their web site in 2016.