From Festipedia, hosted by the FR Heritage Group
(Redirected from Beddgelert Sidings)
Jump to navigation Jump to search

Beddgelert Siding is the name most commonly used for the transshipment yard north of Portmadoc between the Aberystwyth & Welsh Coast Railway (later Cambrian Railways and GWR) and the Croesor Tramway, later WHR. It consisted of a standard-gauge line diverging from the Cambrian line east of the level crossing at Portmadoc (Cambrian) station and curving toward the north-east to come alongside the Croesor line. Here there were sidings on both gauges for transshipment between them, and stacking grounds where the quarry companies stored stocks of slates.

It was built at the same time as the A&WC line, and much traffic was transferred there over the years, mostly slate from and supplies to the quarries in the Croesor valley, traffic between the Cambrian and Portmadoc Harbour, and even slate from the Festiniog line to the Cambrian. This last was of course much reduced when the FR built its own interchange with the Cambrian at Minffordd, but some still went via Beddgelert Siding when Minffordd was congested.

It remained in use when the Welsh Highland took over the Croesor route, and the narrow-gauge sidings were relaid in 1922 with a revised layout as part of the refurbishment for the WHR opening, but the work does not seem to have been entirely satisfactory as locomotives were inclined to derail on the points here. This was a particular nuisance in the period 1929-1934 when WHR trains turned back north of the GWR crossing, and the loop here was used to run round. Contemporary accounts describe the use of ropes or manpower to put the carriages in the siding to allow the engine to run round while staying on the main line.

Facilities included a narrow gauge weighbridge, which was still in situ in 1952 though the weigh house was ruinous. The remains were excavated during the WHR/RhE rebuilding work.

In the early 20th century there was a transshipment shed spanning both standard-gauge lines and the nearest narrow-gauge line where flour from the Portmadoc Flour Mill was transferred to standard-gauge. It is not known when it was built but it is shown on the 1899 revision of the 25" OS plan. In 1919 there was correspondence between the Manager of the Flour Mill and the Cambrian Railways concerning the poor state of this shed, partly due to a previous shunting accident. Neither side seemed to know who was responsible for the maintenance of the shed, and in any case corrugated iron had been unobtainable due to the war. The shed seems to have gone shortly after this[1]. 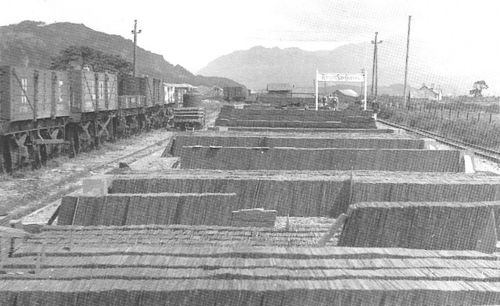 The slate stacking ground at the north end of the yard, c1925

Unfortunately the narrow-gauge lines were not raised to allow level transfer of slate to standard-gauge wagons, which must have considerably increased the effort required from the men. The 1911 picture at the top shows wagons standing on the Croesor main line being unloaded to the stacking ground. When orders were received the slate would be loaded to standard-gauge wagons on the far side. In 1900 Moses Kellow, Manager of the Park & Croesor Quarry Co, proposed that the SG line here be lowered for easier loading, but it was not done[2].

The name may have originated from a proposal to build a standard-gauge line to Beddgelert which would have continued the Beddgelert Siding northward, but was never built.

The Croesor section of the WHR was left in place after the rest was dismantled in 1942, to allow for a possible resumption of quarrying in the Croesor valley after the war, and not removed until 1949 when it was clear that this revival was not likely to happen.

The standard-gauge line seems to have been left in place until the early 1960s. It appears in the 1956 Railway Clearing House Hand-book of Stations as 'Gelert Siding'. That version was also the official name used by the Welsh Highland Railway, from its opening in 1923 [3], to avoid confusion with Beddgelert itself which now had its own station. In the 1919 correspondence mentioned above both names are used. Despite this the Park & Croesor Quarry Co preferred to call it 'Croesor Siding' as seen in the picture at the head of this article, which comes from a brochure issued by that company.

The site of the standard-gauge siding subsequently became the home of the Welsh Highland Heritage Railway who purchased it from British Rail in 1975, and soon afterwards were able to purchase the adjacent Gelert's Farm to use as an operational base. Since 1980 WHHR passenger trains have run along the siding, terminating at Pen-y-mount, although between March 2007 and November 2008, trains ran beyond this on to the original Croesor/WHR trackbed to Traeth Mawr where there was a temporary loop. WHHR trains now terminate again at Pen-y-Mount, which is planned to be an exchange station with the completed Welsh Highland/RhE between Caernarfon and Porthmadog.