Pen-y-Mount is the current northern terminus of the Welsh Highland Heritage Railway (WHHR) and the point where the WHHR makes a junction with the main Welsh Highland Railway. It lies at a height of approximately 4m (13ft), and a route distance of approx 1.37km (0.85 miles) from Porthmadog.[route 1] 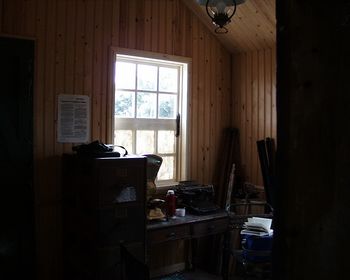 Pen-y-Mount opened on 2nd August, 1980, and consisted of a single platform with a run round loop. It was originally intended to be a temporary terminus pending further extension of the line from Beddgelert Siding onto the original WHR trackbed.

In 1990 it was decided to turn Pen-y-Mount station into a representation of a typical WHR station and in 1996 a replica WHR corrugated iron station building was constructed. Its design is based upon Nantmor station.

The dedication to authentic heritage recreation is demonstrated by a posting by James Hewett in an E-Group posting when he stated:

"... we spent months searching for authentic lead round washers for the tin nails, and found some in east Wales, in a dusty box labelled in old money ..."

In November 2006 James Hewett, then Chairman of the Welsh Highland Railway Limited wrote:[1]

While the concepts are there, the detail is subject to a lot of discussions.

Pen-y-mount will change over the next few years: negotiations are ongoing on the exact way in which the WHRL will interface with the FR's WHR, but I am here providing notes on what is planned, if all goes well. All details are subject to modification in the light of any changes in the WHRL/FR relationship, HMRI agreement, and operational/marketing developments.

This station is planned to have a number of functions:

The atmosphere of a small WHR halt is planned to continue, though facilities will be expanded, sympathetically, as and when necessary. The operational interface between the FR's WHR and the WHRL will be partly administered from PYM, as tokens could be exchanged there, and phone calls to Harbour Control will be made for access to the "main line". Tickets can also be sold from the ticket office there, when manned.

Phase I "already in the planning process" is a platform alongside the Cross-Town-Link, from the north side of the station building, north to the junction point (total length about 82 metres, width 2.5 metres). This would provide access onto the current WHRL platform, while retaining a substantially separate provision, to re-inforce the impression of "entering a 1920s world" when accessing the WHRL platform, to preserve the public access to the station from Pen Mount Lane, and because the specs for FR/WHR(C) platforms differ slightly from those allowable by the WHRL's Light Railway Order.

Completion of this phase would allow passengers from Porthmadog (Harbour) or Caernarfon to change to a WHRL heritage shuttle to Porthmadog (WHHR) Station on Tremadog Road and to the museum shed tour at Gelert's Farm, and, of course, would also allow passengers who have joined the system at Porthmadog (WHHR) to change to go north or south from PYM, on the combined ticket system already in operation. The existence of this new platform will not, of course, preclude WHRL trains from joining the FR's WHR at PYM for heritage runs to Pont Croesor, Beddgelert, Caernarfon and Porthmadog (Harbour), and neither will it prevent the FR's WHR/RhE trains from using the WHHR line to access Porthmadog (WHHR) station: both rights are enshrined in the 1998 Agreement.

Phase II would provide a third platform, to the west of the present loop (a siding would need to be re-situated), allowing passenger trains to pass at PYM, as and when required. This would greatly increase flexibility of operation, not only between the planned two carriage sets at Gelert's Farm (a "shuttle" operation to build on the success of the present operation, which would normally be restricted to a shortish journey and interactive Shed Tour, and a more authentic heritage rake which will enhance the completed WHR by running along most or all of the completed line, complementing the more modern services), but also in the case of a WHR/RhE train wishing to access the line to Porthmadog (WHHR) station, while not interfering with WHRL operations.

Depending on a number of factors, as described above, Pen-y-mount could become an important passenger interchange "or could be a very active rail junction with occasional passenger transfer". Our plan is designed to be as flexible as possible, both to take advantage of any possible variation on traffic flows, and to cater for the future, whatever it may bring for the WHRL or the FR.

During the 2007 Christmas work party a start was made on building the new down platform, this will become Platform No1. Phase 1 consists of 80ft of platform. During Civil's Week 2008 the Red Siding point was moved to the north end of the loop and the platform was extended another 60ft. Also a paling fence was installed along the back of the new platform and a foot crossing was built at the southern end of the station. During the week the 75lb rail in the down line was placed on base plates with Pandrol fastenings, the up line 50lb rails were replaced with 75lb rails on base plates with Pandrol fastenings.

Track was laid from Pen-y-Mount Junction to the site of Cae Pawb trap points alongside Gelert's Farm Works during the WHR Ltd 2008 Spring Bash work party.

The replica signal cabin originally intended for Cae Pawb has been erected at Pen-y-Mount where it is intended to be the signal box for the junction between the two railways.

Pen-y-Mount now has three platforms: platform 1 on the WHHR loop line, platform 2 on the WHHR mainline, and platform 3 on the WHR mainline. The only platform regularly used is platform 2, which the regular WHHR service trains terminate at. There is a replica "crinkly-tin" building between platforms 2 and 3, housing an office and a waiting shelter. There is also a signal box, originally due to be installed at Cae Pawb (this however was not possible due to political relations between the FR Co and WHHR at the time), although it does not contain signalling equipment. Regular WHR services from Porthmadog Harbour do not call at the station as originally envisaged and thus there is no interchange provison, although this has always been an aspiration held by many as indicated by the sign on platform 3, which reads "PEN-Y-MOUNT JUNCTION / Change here for Welsh Highland Railway Museum, Porthmadog (WHR) Station, & [National Rail]".

Signalling consists of ground-shunt signals at the south end of the station, controlled by a push-button groundframe on platform 2. There was previously a signal at the north end, installed in 2017, which indicated whether the connection to the WHR mainline was at normal or reversed (i.e. set for the headshunt or the WHR mainline from the WHHR perspective). It was a yellow miniature semaphore shunting signal. It was removed in 2019 as it served no purpose at that time given the other difficulties with using the connection; fuller plans for the signalling of the junction are being developed, but progress remains slow as a result of Covid-19.

Services on the WHHR are not as was anticipated during the restoration itself. All regular services from the WHHR terminus in Porthmadog terminate here, and do not continue onto the mainline towards Pont Croesor and Beddgelert except during special events. Considerable work would be required to enable any sort of regular service by the WHHR onto the WHR mainline, or by the WHR onto the WHR. These include the installation of facing point locks on the connection, the installation of signals on the WHR, and the installation of a Micro-ETS intermediate token machine. The initial roll-out of Micro-ETS from 2019 onwards does not include an intermediate machine at Pen-y-Mount.

As things stand, for a train from the WHHR to join the mainline, the Porthmadog Harbour-Pont Croesor token has to be driven from its location to the station, the points have to be manually clamped in the reverse position, and the stop block has to be unlocked by both FR Co and WHHR staff and removed. This is a barrier to regular movements, although is sufficient for occasional special trains.

You may also see a video of the crossing here