FR50 events were held during 2004-2005 to commemorate Alan Pegler's acquisition of the FR Co. on 24th June 1954 - the action which secured the Ffestiniog Railway's future. 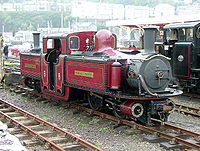 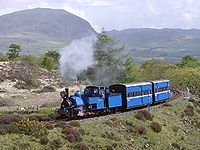 The main event of the Ffestiniog's Golden Jubilee celebration was the FR50 Weekend held over the 2005 May Day Bank Holiday weekend. The stars of the event were Livingston Thompson on display at Harbour station from the NRM, York, and Darjeeling No. 19. 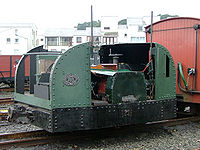 Saturday 6th August 2005.
The First Train.
Prince was an ancient 92-year-old back on 2nd August 1955 when, newly re-boilered, he coupled up to Nos 10 & 23 for the trip across to Boston Lodge for the first time under the railway�s new administration.

October 15th & October 16th 2005.
Vintage Weekend.
The ultimate Victorian weekend, on a railway like no other. All of our historic and colourful locomotives & carriages in use on one weekend, plus the launch of our own 'boat' - a stunning replica of a unique sail operated, railway carriage from the 19th Century Ffestiniog Railway.