Diagram of a Fairlie locomotive

A Double Fairlie is a steam locomotive built to the Fairlie's Patent design of Robert Francis Fairlie using two articulated power bogies, one at each end of the engine. 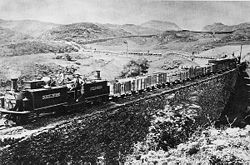 The Double Fairlie was patented by Robert Francis Fairlie in 1864. He believed that conventional steam locomotives were inefficient because they wasted weight on carrying wheels and tenders. He also wanted to create a locomotive that operated equally well in forward or reverse.

The resulting locomotive had every wheel driven and was symmetrical front to back. The design used a single long boiler with a single dome and firebox in the centre. The single firebox, caused problems with drafting, and had to be altered with a middle 'feather'. The first narrow gauge 'double fairlies' (not called by that name as they were constructed without Robert Fairlie's involvement or approval) were designed by Charles Fox and built for the 3ft 6in gauge in Queensland in 1866. They contained some unique features and were not successful.

The third Double Fairlie to be built (with Fairlie's approval) was the FR's Little Wonder. It was designed and built by George England & Co. It was a great success, partly because it was the first Double Fairlie with two separate fireboxes which avoided the earlier drafting problems. Little Wonder's success provided the impetus for narrow gauge railway building across the world.

The Double Fairlie went on to enjoy considerable if generally short-lived success in various countries, notably Mexico and the Caucasus.

The use of a steam bogie also allowed the development of the Single Fairlie, examples of which were built for the FR (Taliesin) and the NWNGR (Snowdon Ranger, Moel Tryfan and Gowrie).

Little Wonder saved the FR from having to go to the considerable expense of doubling the line. Because this loco had been so successful in publicising his design, Fairlie granted the FR the rights to build more Fairlie locomotives without paying the patent fees. The FR is now famous as the home of the Double Fairlies and has gone on to own six locomotives of this type. The Ffestiniog Double Fairlies are all of an 0-4-4-0 wheel arrangement.

May 2005, and for the first time since the 1920s, the Ffestiniog had three Double Fairlies on the locomotive roster. Engines, from left to right, are David Lloyd George, Earl of Merioneth and Merddin Emrys 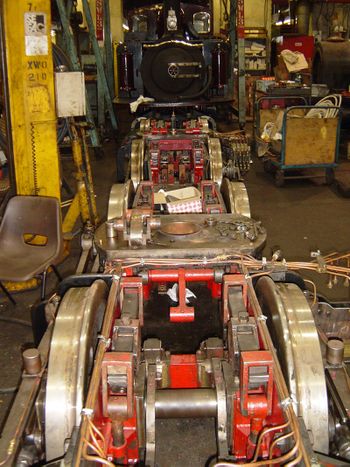 Power bogies from Earl of Merioneth in the erecting shop at Boston Lodge. In the background, Merddin Emrys is receiving attention to its 'bottom end' bogie.

The power bogies for the Ffestiniog's Fairlies (doubles and single) have some standard features but are not directly interchangeable. However they can be (and often are) swapped around with a bit of work to adapt them to their new loco. An example difference is that Merddin Emrys's two bogies and Taliesin's single one have steam-operated drain cocks, but David Lloyd George and Earl Of Merioneth have lever operated drain cocks.[3] A summary of extant bogies is provided here, in order of bogie age:[4][5][2]

Earl of Merioneth's current bogies were, until 2014, the oldest pair still operating. The frames are from Livingston Thompson and date back to 1896 if not before. They were in use under Merddin Emrys from 1923. In 1934 they were fitted with the wheels from James Spooner, the original wheels having been prone to coming loose on the axles. In 1937 the steam chest from the first Taliesin was put into one of these bogies. In 1972 an axle failed so they were removed from service under Merddin Emrys. They were next used, much altered and with many new parts, under the new Earl Of Merioneth from 1979. The new parts included wheels (both bogies) and valve gear (one bogie only) to new designs. They were used with the Earl until 1988 when the valve gear failed. The rebuilt bogies were found to be unsatisfactory in service, particularly the mismatched valve gear, so they were rebuilt with the wheels and motion modified to be closer to the original design and put back under the Earl in 1989. They were next used under David Lloyd George from 1992 to 2012. In 2013 and 2014 they were once again in use with Earl of Merioneth whilst bogies A and B were overhauled. These bogies were then stored as spares until 2018 when they were put back back under Earl of Merioneth when it was withdrawn.

The new James Spooner's current bogies were made new in 1985-8 for Merddin Emrys with wheels and motion from Merddin's previous bogies (The old A and B bogies). They were put under Earl of Merioneth in 1996. New rods were required after a failure in 2008. These bogies were removed for overhaul in 2013 before going back under the Earl in 2015 where they remained until the Earl's withdrawal in 2018. They were subsequently removed from the Earl and were put under the new James Spooner when that locomotive's frame was erected in 2019.

Taliesin's current bogie was was built around 1997 for this loco using parts originally intended for David Lloyd George. It is different from the double engine bogies due to the provision of sanders, but is otherwise very similar. In 2011 it was fitted with a new monoblock piston valve cylinder casting.

Merddin Emrys's current bogies were new in 2004-2005. They used the remainder of the parts originally intended for David Lloyd George.

David Lloyd George's current bogies were new in 2014. They are fitted with monoblock piston valve cylinders as used on Taliesin.