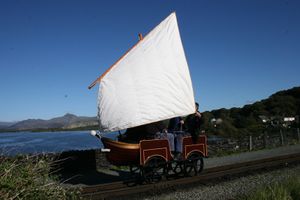 The Boat is a unique gravity and sail powered inspection vehicle on the Ffestiniog Railway. The original was the private vehicle of the Spooner Family until it was destroyed in a collision.

A modern replica has been constructed by the Festiniog Railway Heritage Group using money left to them by the late Michael Seymour. Completed in 2005, it can often be seen operating on the line during special events.

The normal mode of operation for the boat is for it to be towed up the line behind a train (usually as far as Tan y Bwlch) and then to gravitate back down as far as Pen Cob. Here the sail can be raised for the journey across The Cob to Harbour Station. 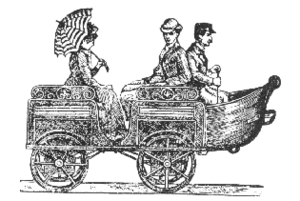 The original Boat was built partly as an inspection vehicle and partly as a private vehicle for the Spooner Family. Its date of construction is unknown but almost certainly pre-dates the operation of steam locomotives (1863), being referred to with amused approval by Captain Tyler, HM Inspector of Railways, in 1864. It is recorded as being demonstrated in 1876 and achieving a speed of 27mph and being able to stop from this within 30 yards.

The original boat came to a sticky end when Charles Easton Spooner disobeyed the rules for train staff working and crashed into an up train in February 1886. One of those on it at the time was thought to be Norah Tiddeman, Charles Easton's niece. However, more recent research suggests it might well have been her older sister Elizabeth, who was known to visit the Spooners in Portmadoc. The other passengers were Miss Robinson and Mr Robinson. Mr Spooner and Miss Robinson were badly hurt and they were bandaged up and laid up in bed. Miss Tidderman and Mr. Robinson "came off luckily".[1] Latest information suggests the accident was above Garnedd Tunnel. [2] 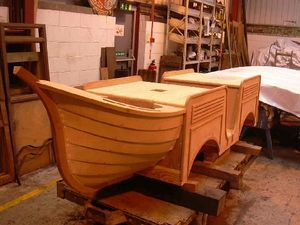 The replica body, as delivered by Bill Piper. The benefits of employing a boat builder are apparent in the perfect form of the clinker-built prow.

FR Heritage Group Chairman, Michael Seymour, wanted to see a replica of The Boat. When Michael died in 1999, he left money to the FR Heritage Group to be used to build a replica. Michael had reported on the demise of the original boat in Festiniog Railway Magazine number four.

The late David Newham spent many hours researching the details of the project; there were no drawings or photographs to work from, only an engraving and some rather vague, contemporary, descriptions including one from Captain Tyler in his report of his inspection of the line for passenger traffic. David's friend Stuart Baker, who had also worked on the HLF project to restore carriages 15 and 16 and the Curly Roof Van and Ashbury projects produced a drawing and from this a project plan was developed.

Unable to organise a volunteer team to undertake the task FR Heritage Group secretary Adrian Gray, who is also one of the trustees of Michael's estate, let a contract for construction of the body and mast to Bill Piper, a boat builder working in Porthmadog who had done some casual work with Norman Bond's carriage building team. The body was delivered in time for the FR50 weekend in September 2004 and the mast and yard followed soon after. The metal underframe, including specially cast wheels, was required to complete the vehicle and it was hoped that this could be done by a combination of volunteers and Works staff. 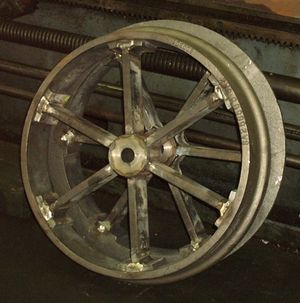 In the Spring of 2005, Norman Bond made the patterns for the tyres of the wheels, they are far larger than anything else the railway uses, and shipped them off to the finisher. At about the same time in early 2005 the idea was conceived that The Boat could be ready in time for that year's Victorian themed Vintage Weekend and would form a unique centrepiece to the event, which traditionally includes the FR Heritage Group Annual General Meeting. As a result the advertising slogan for the weekend became "Pushing The Boat Out". This meant that the pressure was now on for the build team.

John Powell spent many days preparing and painting the body, ready for Glen Williams to apply the lining, after which John gave it some coats of varnish.

Construction of the metal underfame and braking system, working to the drawings prepared by Stuart, was undertaken by Dave High, Rob Collins and Roland Lewis. Rob was building a replica of the ex-WHR Morse speeder known as Busta and it was decided that several items, such as hornguides, bearings and axles could be common to the two vehicles. With very little help they made good progress, only to find that a misunderstanding between Norman Bond, the pattern finisher and the foundry might leave them without wheels!

With six weeks to go to the Vintage Weekend the foundry was about to start its two week annual holiday and they hadn't got the patterns. Norman melted the Boston Lodge telephone and the cast steel rims were eventually delivered to Boston Lodge at the end of September. Dave Yates spent several days welding spokes between hubs and rim, a task made more difficult because of the grade of steel used for the casting. Great patience and an expensive supply of special welding rods were required! The job was complete on the Wednesday before the Vintage Weekend and Thursday was spent turning the faces and boring the hubs true. 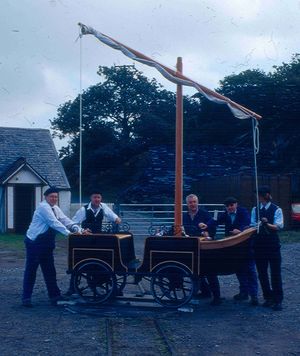 Turning on one of the small turntables.

The first weekend in use[edit source]

Early on the Friday morning Rob Collins and Andrew ('The Apprentice') Foulds took the wheels and axles to the Talyllyn Railway's works at Tywyn to be united using their hydraulic wheel press. By the afternoon they had returned to Boston Lodge and fitted the wheels to the underframe. Unfortunately time ran out and it was not possible to fit and adjust the brakes, nor had the specially made sail arrived.

In the midst of all the mechanical panics Norman Bond, Jon Whalley and Paul Lewin had been working hard to get approval for The Boat from Her Majesty's Railway Inspectors. The Inspectors' incredulity is completely understandable, their refusal to grant permission for sailing The Boat across the Cob was equally understandable, if disappointing. As it was, without fully functional brakes, the matter was academic (As a matter of record, HM Inspectors subsequently saw The Boat and were as amused as had been Capt. Tyler; they gave it type approval).

On Saturday 15th October 2005 FR CME Jon Whalley issued a once only authority for The Boat to make a return journey from Boston Lodge to Harbour Station, propelled by locomotive, hand or gravity. No locos were available, gravity doesn't work across the all but level Cob so a small team comprising Rob Collins, Roland Lewis, Adrian Gray and Iain Wilkinson assembled to push the Boat across from Boston Lodge to Harbour Station.

Adrian had persuaded Samantha Hughes, who had put heart and soul into providing Victorian costumes to enhance the Vintage Weekend, to great effect, that she should have the honour of 'arriving in style' as the Boat's first passenger. She wasn't convinced that he was telling the truth as they took the train from Port to the Lodge but it soon became apparent that the offer was genuine.

Before The Boat could leave the Lodge we had to first turn it to face the right way as it had been 'launched' with its prow facing to Blaenau. 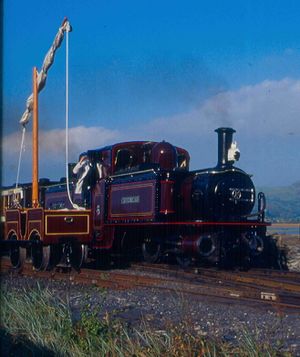 We also had to wait for the Up train, comprising the recently repainted Merddin Emrys and Victorian train to pass on its way to Minffordd. The opportunity was taken to pose the two stars of the weekend together as Merddin passed Pen Cob.

As soon as a token could be taken Sam took her seat and Adrian, Iain, Rob and Roland started to push The Boat out across the Cob. It rolls very freely so, in spite of the combination of Victorian costume and the absolutely glorious weather, they didn't even raise a sweat! The several photographers along The Cob greeted the strange 'train' with smiles and raised cameras and, as it reached the Home signal, Iain gave the required 'whistle' with a short blast on his bugle. The train was halted a little before the Porthmadog king points so that Iain could assume his place as driver and then Adrian, Rob and Roland raised the pace, releasing The Boat to run, apparently under sail or gravity, into the siding beside the seawall for the benefit of the many photographers. A prolonged period of photography followed; Sam and Iain must have been committed to several yards of film and several million bytes of digital imagery.

Escaping the nonsense Rob and Roland slipped off to fetch a parcel which had been delivered to Harbour Station minutes before The Boat set off from Boston Lodge. This contained the specially ordered sail so, when the fuss had died down they took a few minutes to rig it, in place of the modern item loaned by Andy Foulds for the first run. With the benefit of the stiff breeze a couple of runs of about 25 yards along the siding proved that The Boat really will sail! We had to be a bit careful about this, out of respect for Her Majesty's Inspector.

For the rest of the weekend The Boat remained at Harbour Station in the care of Roland Lewis, occasionally being shunted, by hand, from one end fo the station to the other and drawing admiring glances from all who saw it.

On Saturday 18th July 2007, the Boat ran under sail across the Cob using an Engineer's possession. On the way back it achieved a speed of 15.4mph. It was found to be very stable - the sail may be a bit small for light winds.

On 5th October 2008 further trials took place on the Cob with a new, larger sail.[video 1]

Initially fitted with a small sail, The Boat could only reach 10 m.p.h, so a larger sail (dipping lug rig) was prepared, and with this she has reached 20 m.p.h. by GPS (17.4 knots).

She was memorably used at Quirks and Curiosities Weekend (May 1st - 3rd) in 2010 to carry the Bishop of Bangor from Port to Pen Cob to dedicate the memorial to deceased volunteers and to baptise the locomotive Lyd. The Bishop looked enchanted, but his fellow clergyman, a Director of the FRCo., looked terrified - he knew too much.[video 2]

In June 2015 when the new Carriage 150 was put on display at Paddington Station and The Boat was taken as well.