From Festipedia, hosted by the FR Heritage Group
(Redirected from George England & Co)
Jump to navigation Jump to search 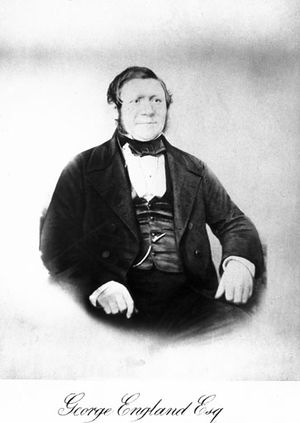 George England was born in Newcastle upon Tyne in 1811 or 12. He received his training as an engineer with John Penn Boiler Works and other shipyards in south east London. Later he set up the Hatcham Iron Works and started to make jacks and other machinery. In 1848 he started building railway locomotives and in March 1863 received an order from the FR for two locomotives with the option of a third and later a fourth. Three years later he built another two slightly larger locomotives, see England Engines.

In 1862 his daughter, Lizzie, eloped (under the age of 21) with and married Robert Francis Fairlie, inventor of the Fairlie's Patent locomotive. This led to an acrimonious court case brought by England against Fairlie, which England lost because he was not married to her mother at the time she was born and therefore Lizzie was declared to be nobody's child. It seems no ill will lasted between the two men as they later worked together again.

He had been a director of the Crystal Palace Company after it moved to Sydenham Hill (within a few miles of Hatcham) but resigned after his personal affairs were made public by the trial with Fairlie. He declared he had uncovered incompetence and corruption which made him unpopular. He was also said to be very unpopular with his workers and ruled them with a "rod of iron".

In addition to the single England engines (above), George England also offered to build a Double Fairlie for the FR in 1868. The engine (Little Wonder) was built at England's works in 1869, being delivered in August.

Shortly afterwards, in September 1869, George sold the Hatcham business to the Fairlie Engine And Steam Carriage Company which was a partnership of Robert Francis Fairlie, his son George England Jr., and J. S. Fraser of the GWR. He retired, living on in France until he died in 1878.

The only other George England loco still in existence is "Shannon", a small standard-gauge 0-4-0 well tank engine dating from 1857 which was built at a cost of £800, for Captain William Peel, R.N., owner of the Sandy and Potton Railway in Bedfordshire. The S&PR was absorbed into the LNWR, but the loco, after a brief period of use on the Cromford & High Peak line of the LNWR, was sold in 1878 for use on the Wantage Tramway where it ran until 1945 and is now preserved at the Great Western Society depot at Didcot.

The other surviving England locomotive at Didcot.