Fairlie's Patent (British No1210 of 12th May 1864 and French of 23rd November 1864) was taken out by Robert Francis Fairlie and describes 'Improvements in Locomotive Engines and Boilers'. The specification runs to fourteen pages and includes a number of drawings. The salient points are a double boiler with central firebox and two smokeboxes. From that point follows also that it must be a tank locomotive, with fuel and water carried aboard.

The first Fairlie locomotive, 'The Progress', was built in 1865 by Cross & Co. for the Neath and Brecon Railway. It was an 0-4-4-0 double engine appearing similar in design to FR double engines except for having one firebox rather than two and only one dome. In practice the single firebox was found to be a flawed design as the draught from each set of cylinders worked against the other. The arrangement with which we on the FR are familiar, a double boiler with twin fireboxes, was adopted for all double Fairlie locomotives that went into traffic.

Curiously, the arrangement of a double boiler, double bogie locomotive is not part of the patent and, as we well know, Fairlie also designed a number of single boiler engines. However, the double boiler, double bogie design achieved its success because it permitted a locomotive of significant power to be used on railways having curvature that would limit the size, and thereby power, of a rigid framed locomotive. The 1870 trials on the FR, pitting Little Wonder against Welsh Pony gave a graphic demonstration of this and established the double Fairlie as a useful type.

Only later, as railways matured, did the limitations of the double boiler design become apparent. The Fairlie locomotive was never seriously considered by the railways of Britain, there being neither the gradients nor severe curves to warrant extended use of such a heavy and specialised design. Only for the unusual operating conditions existing on the FR has the Fairlie principle justified its use in this country.

The drawing below, based upon Merddin Emrys, shows the pertinent features of an FR double Fairlie. Working from the bottom it shows;

the carrier frame, this connects the two bogies and takes the traction forces;

the boilers, part-sectioned to show the separate fireboxes, the wagontop section and, on the right, the coal bunker inside the tank;

the tanks and cab.

Note the exhaust steam going via the pendulum pipe to the blastpipe and up the chimney and the flexible arrangement for delivery of live steam, also through the bottom of the smokebox. 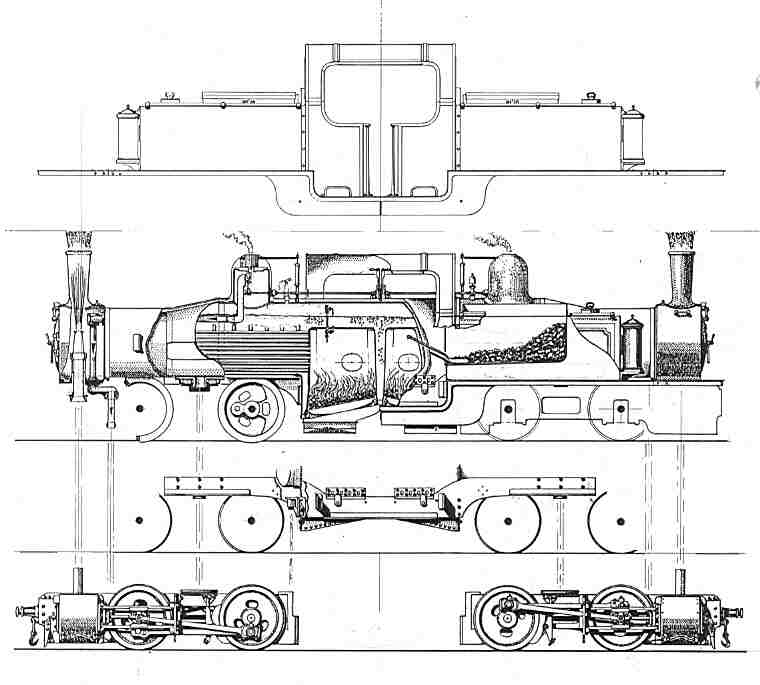 Fairlie locomotives were sold in a number of overseas countries, on a number of different gauges. Nonetheless, the Fairlie and the Festiniog were often discussed together.