After the introduction of steam on the line in 1863, the Festiniog Railway used separate locomotives both at the Top and Bottom ends of the line to work shunting duties. No loco was assigned permanently; they were rotated for maintenance purposes.

This engine, invariably a light England locomotive until the period between the Wars, worked between Minffordd exchange sidings, the harbour slate wharves and, latterly, the Beddgelert Sidings. (Even after the introduction of steam, slate still gravitated down, coming to a halt in the Mineral Loop at Minffordd before going over the weighbridges.) Little seems to be detailed about working patterns, 'as required' probably being usual, although there were several defined 'paths' between Portmadoc and Minffordd. After WW1 some of this work was done by the Simplex tractor. The locomotives worked from the original running shed at Boston Lodge. The bottom shunter was always turned at Boston Lodge turntable to face Blaenau before the end of the previous day. The reason is not certain but Hugh Davies suggests it was to give the driver a better view while shunting.[1] Because of the layout of the slate wharves it would only be facing tender first to most but not all of the slate wharves at Minffordd and Porthmadog. 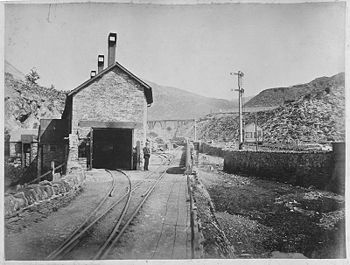 Dinas Station building, with the open doors of the loco shed, 1887

The Top Shunter was usually the England Engine that had hauled the Monday morning Up quarrymen's train. The locomotive worked a 12hour daily shift from 7.00am to 7.00pm and, apart from the obvious work of shunting and marshalling, it worked trips to -

- Brooke's Quarry, where at its height 4 trips were made daily.
- the Groby Granite Quarry

(Traffic from both quarries was originally granite setts but later changed to crushed granite macadam; both were taken to the LNWR exchange yard.)

- the Newborough Slate Mills, where slate and timber were delivered to be turned into finshed writing slates, for schools, and the finished products were removed for onward shipment.

For a period the Top Shunter also hauled a summer evening train to Porthmadog, returning to Blaenau at 9pm.

Initially the locomotive was housed in a shed at Dinas, built in 1863/4, as part of the station building. The loco crew lived during the week in a small barracks, again part of the station complex. The shed was long enough to house two locomotives and Taliesin often took the second place, in order to be in place for the first Down Passenger of the day. There was a pit in the shed and a water tank, which may have served the station house and barracks as well as the locos. The shed remained here even after passenger facilities were withdrawn and the closure of Dinas Station in 1870, and only closed after a new, two road, shed was built at Glanypwll around the turn of the 19th to 20th century.

Latterly the workmen's train ran daily but the Monday Up train was the longest, and the England locomotive still stayed as Top Shunter. The morning train left Porthmadoc variously between 5.20am and 6.20am, according to the season.

A 1921 review of shunting work[edit source]

In 1920, having lost Boston Lodge's wartime Government income, the railway's review of finances revealed that it was costing about 32/6d to earn £1! Management changes resulted in Major G.C. Spring being appointed in 1921 to undertake an in-depth review. One finding was that although although the tonnage of slate carried since 1914 has declined by 11%, the mileage worked by the shunting engines (both at the top and the bottom) had increased by 44%. In all, nearly a fifth of all locomotive mileage, and almost half of the locomotive expense, was going on the non-revenue earning activity of shunting.

The full text of this section of his report is as follows (a "¶" added before each paragraph heading for readability):

1 - At Minffordd Junction and Portmadoc
2 - At Duffws and Dinas Branch.

The shunting mileage is very large being about 17% of the loaded train mileage for 1920.

No.1 sorts and distributes slate loaded wagons into the various owners' wharves, marshals and forms empty wagons for return to Duffws and also draws occasional loaded wagons from the stacking wharves at Portmadoc to the yard at Minffordd.

No.2 is during the summer season stabled at Dinas Engine Shed but during the slack season at Boston Lodge. During such latter months this engine travels up light or draws any loads that may accrue from roadside stations, such as Moelwyn (Brookes Quarry Siding) and spends the remainder of the day in clearing and marshalling the slate wagons to and from the various slate quarries, the inclines of which are at varying distances from Duffws terminal.

There are thus daily two Engines in steam whose Engine mileage is mostly non-productive but whose cost must be borne. The shunting required on other Railway quarry line systems by the necessity of marshalling the various owners' wagons into train or station order is entirely absent since all slate wagons are the Company's property and can be used indiscriminately for any quarry.

The average number of wagons dealt with at Portmadoc and MInffordd Jct daily is 50 and 100 respectively.

The shunting of wagons at intermediate stations for roadside goods purposes is generally carried out by hand.