The Festiniog Railway's Act of Parliament of 23 May 1832, section XCIX, provides that ... the said Company shall cause the said Railway or Tramway to be measured, and Stones or other conspicuous Marks to be set up and forever maintained at the distance of One Quarter of a Mile from each other, with proper inscriptions.

1836 first laid down running the length from Rhiwbryfdir, the terminus of the Dinas line, to 'a point on the public wharf', on the western side of Portmadoc Harbour. It was some months after the opening of the railway before the company started to fulfill its statutory obligation to create the quarter mile marker posts. Amongst the accounts for December 1836 there is a document detailing the payment of £3 to Morris Owen for the engraving of a number of markers. A final payment, £1 1s 6d (£1.075 todays money) appears two months later. More payments were made to others in respect of similar work, between May and July 1837. Only two examples of these original stones has been found. In 1965, one was found, serving as a paving slab, in Dduallt Manor house when setting up accommodation for the Deviation and in 1978 another was found near Rhiw Goch. A drawing of the Dduallt stone, made by Michael Seymour, can be seen on the cover of "How Festiniog got its Railway", by MJT Lewis. The detail on the stone reads "To P.Mc. 9m 2f -- to R.Br. 4m 0f". These measurements were soon rendered inaccurate by the opening of the Moelwyn Tunnel, in place of the slightly longer route over the orignal inclines. (Whether this was ever adjusted remains unclear - ACG)

1863-70 the measurement was amended to run from the foot of the Maenofferen incline at Duffws to Porthmadog, aftr the Dinas line was demoted to a branch and Duffws became the main station in Blaenau and the source of passenger traffic. Most remaining markers date from this revision.

v3 amended to run from Porthmadog to Duffws. In 1955 the railway resumed services from Portmadoc, with a determination to, but no certainty of, restoring services to Blaenau. It made no sense to measure distances from the top of the line so Allan Garraway arranged the removal of the existing markers, to avoid confusion. A straight reversal of mileages was not possible because the railway no longer ran from the previous zero point on the west of the harbour. Zero was now taken to be a point beside the water tower at Harbour Station.

1970s & 1980s As the Deviation was brought into use mileages at the top of the line had to be recast to take account of the extra mile (or so) added by the the Deviation and realignments since the re-opening. The new upper terminus became Blaenau Ffestiniog Central, though some measurements were projected before the Deviation was complete.

1991 Members of the Railway Performance Society and other volunteers conducted a detailed, literally chain-by-chain, traditional measurement of the railway from bottom to top. For the unwary, the terms Up and Down on the FR mean literally that - uphill and downhill. This is the reverse of ordinary Network Rail terminology. The result of this survey can be seen today in the equivalent Stones or other conspicuous Marks to be set up, which take the form of permanent oval plates every 1/4 mile, and/or chainage markers, usually orange numerals marked either on a peg, structure, or stone.

Over the years a number of changes have taken place that would affect the measurement of the railway; the first was the opening of the Moelwyn Tunnel, after 1863 various adjustments were made to adapt the line for locomotives and even more were made after the FR's Act of 1869 when several curves were realigned and/or eased, including the opening of Garnedd Tunnel. There have been three different alignments in the area of Tanygrisiau and the opening of Tan y bwlch in 1872 would all have altered the measurement by small amounts. More recently the change of zero point to Harbour Station and the Deviation have made significant changes.

In their final form the milestones were quite distinctive with quarter, half and three-quarter markers comprising triangular slate slabs bearing circles and arrows to indicate the distances to the nearest full mile post, which usually showed the distances to Blaenau and Port as incised text upon a slate slab.

During the course of their work for the P.Way Dept. a number of Dee and Mersey Group volunteers have become interested in the history of the milestones and their 'original' locations, many of which can still be found, even forty or more years since Allan Garraway arranged for the stones to be removed! Several stones survive in the Museum collection and D&M are arranging for replicas of these and the missing stones to be replaced as a contribution to the railway's heritage.

It should be noted the original 13 ¼ mile line ran from a location now buried under slate waste near Dinas, to the Yacht Club at Porthmadog, with no Moelwyn tunnel. It now runs from Porthmadog Water tower, to Blaenau Ffestiniog, via the deviation, a total of 13.54 miles. From buffer-stops to buffer-stops the distance is 13 miles 56 chains (13.70 miles).

There follows a list of where markers should be / are to be found: 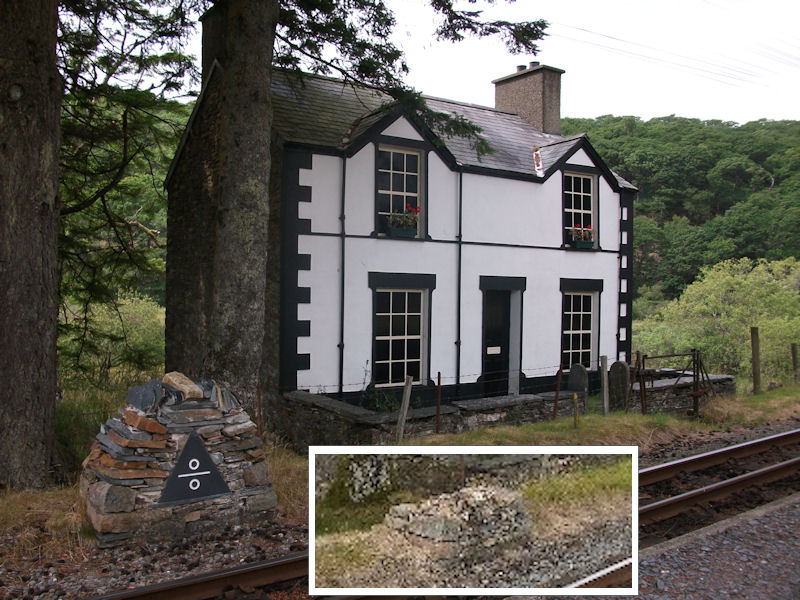 A copy of the original in situ at Dduallt, alongside the refurbed Rhoslyn Cottage 2010. The inset shows the semi demolished base in 2005