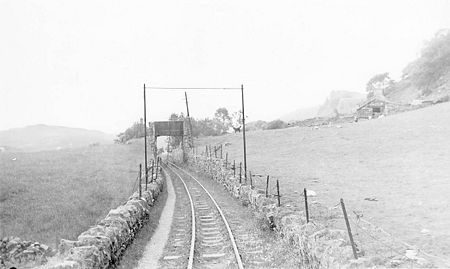 The gantry at Buarth Melyn standing approx 30m in front of bridge, looking south towards tunnel. By the time of the photograph (taken after the railway had closed) the rat tail ropes had been lost.

Rat Tails was the name given to the devices erected to protect the brakesmen of Festiniog Railway gravity trains from the dangers of bridges, footbridges and tunnels.

Brakesmen worked their trains by walking along the tops of the loaded waggons to adjust the brakes and, while so doing, they could be foul of the Festiniog Railway's restricted loading gauge. To give them warning that they were approaching a hazard gantries were erected from which hung knotted ropes at a level that would strike a standing brakesman and cause him to sit down. The success of the system, however crude, is borne out by a complete lack of any records of brakesmen suffering injury from bridges or tunnel portals.

The use of ropes ensured that other rolling stock was not damaged. The limited photographic evidence suggests that the passage of other stock and the effects of locomotive exhausts made the central ropes pretty tatty!

Photographs of the gantries that survived at closure show that they comprised uprights of two lengths of worn rail, almost certainly doublehead, joined at the top by a length of round bar, from which the ropes hung. The use of doublehead rail, an 18xx introduction on the FR, begs the question of exactly when the gantries were erected. It is scarcely credible that they would have been renewed so they appear to have been a mid-life addition to the FR.

Rat Tail gantries are known to have existed above the old Rhiw Plas bridge, above Garnedd tunnel, at the bottom end of Dduallt station (where there was a footbridge followed by another at Hen Bont), and above a footbridge at Buarth Melyn, between Tunnel North and Tanygrisiau, as in the illustration shown.

Logic suggests that there should have been a gantry below the junction at Glanypwll, before the series of footbridges through above Tanygrisiau and at the north end of the Moelwyn tunnel, but photographic or anecdotal evidence is lacking.

The Festiniog Railway Heritage Group aspire to recreate as many of the gantries as possible and a fund is open to receive funds to cover the cost of materials. Reinstating the ropes may be more difficult, but they are open to suggestions that will not impinge negatively upon current operations and stock.